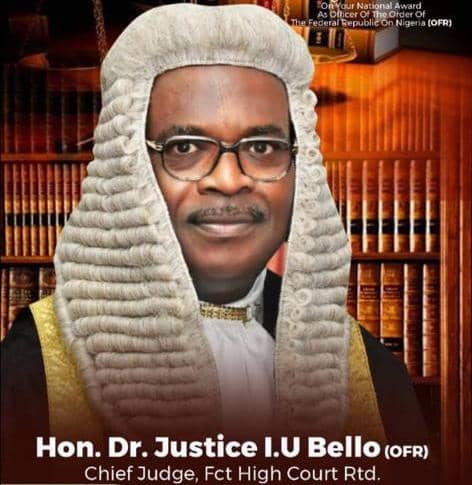 As it is throughout history of civilizations, genuine statesmen and patriots painstakingly earn their names and statuses. In Nigeria, anywhere names of distinguished men and women who are symbols of justice and the rule of law are mentioned, the name of the name of the Honourable Justice (Dr) Ishaq Bello (Rtd), the former Chief Judge of the Federal High Court of the Federal Capital Territory (FCT), Abuja, will definitely occupy a prominent place.

It is on this note that when the present administration decided to honour some eminent Nigerians who have served the country or contributed to the growth and development of Nigeria in one way or the other, the retired jurist was counter as one truly deserving.

President Muhammadu Buhari have him a national honour of the Officer of the Order of the Federal Republic (OFR) in recognition of his selfless services to the nation, both when he was in the service and even in retirement.

Of course, many people within the bench and bar, as well as those at the top hierarchy of Nigeria’s governance and development duly acknowledged that Honourable Justice (Dr.) Bello is a man who has stood for the nation and her people, especially in the course of his illustrious public service.

Justice Bello has served at different capacities in private and public services. He was a magistrate, legal adviser.

He demonstrated his reformist streaks when he headed the FCT High Court with many infallible landmar evidences.

He was a Deputy Chief Registrar of the Supreme Court of Nigeria in 1995. He served for another two years before he was then appointed as a judge of the High Court of the Federal Capital Territory (FCT) in 1997. History shows that, at this period as a federal attorney, he presided over several high-profile cases, including the State vs Francis Okoye and Others following an assassination attempt on the life of the late Dora Akunyili, the then director-general of the National Agency for Food and Drug Administration and Control (NAFDAC).

He also handled the “Apo Six” case starting from 2005, obviously Nigeria’s “most infamous case of extrajudicial killing. In 2017, he convicted two police officers over their involvement in the murder of two out of the six civilians.

One major landmark of Bello as the Chief Judge of the FCT, was that he decongested prisons in Abuja. In October 2017, he was appointed as the chairman of the Presidential Committee on Prison Reforms and De-congestion, now Presidential Committee on Correctional Service Reforms and De-congestion, by the Minister of Justice and Attorney General of the Federation, Abubakar Malami, a committee whose report led to the eventual reform processes of the Nigerian prison system. It is on record that Bello released thousands of inmates who had already spent time in prison custody beyond the punitive measure prescribed by law.

However, what must be properly underscored is the fact that there cannot be a reform without a reformer. The Honourable Justice (Dr) Ishaq Bello (Rtd), the former Chief Judge of the Federal High Court of the Federal Capital Territory (FCT), Abuja, is that reformer.

The Federal Government, dissatisfied with the dehumanizing and discrepit situation of the Nigerian prison occasioned by congestion, lack of basic facilities, delay in trial of inmates awaiting trials, delay in administration of justice decided to set up the Presidential Committee on Prison Reforms and Decongestion now known as Presidential Committee on Correctional Service Reforms and Decongestion and appointed Justice Bello it’s Chairman.

The highly revered justice, based on his decades of experience at the bench, understands that whenever the law is weak, misapplied, underserved or does not apply, it subjects the citizens to utter helplessness and despondency.

I deed, Justice (Dr.) Bello is a rubicon in statesmanship. He has a trajectory of public leadership profile that is defined by competence, experience and intellectuality; yet, that is not why he led the successful revolutionary reform in the history of Nigerian prison system. It is his tested patriotism, commitment, devotion and compassionate mien that is a footprint any where he serves the country.