IPOB lawyer, Ejiofor, cries out over alleged unawful detention of 24 members by DSS since 2021 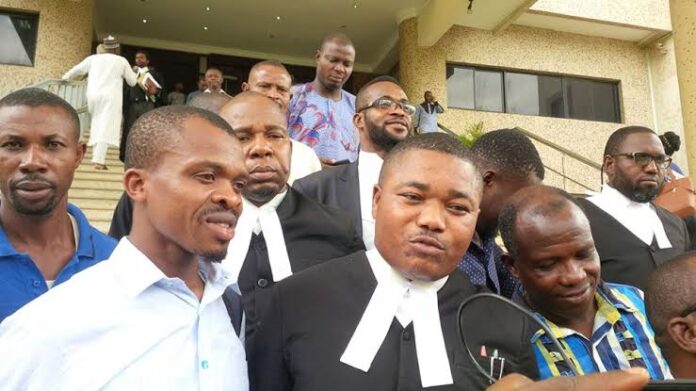 A lawyer to the proscribed Indigenous People of Biafra IPOB, Nnaemeka Ejiofor has cried out over the alleged unlawful detention of 24 members of the body by security operatives of the Federal Government.

Ejiofor claimed that the detainess were picked up in various states of the South East geo-political zone and had been clamped into detention since 2021.

At a Press Conference in Abuja yesterday, the legal practitioner alleged that all efforts to locate and interface with the detained IPOB members have been rebuffed by the authorities of the Department of the State Service DSS.

To worsen the situation for families of the detainess, the counsel alleged that the military authorities and that of the DSS believed to be responsible for the ordeal of his clients have been making conflicting and confusing information on the whereabouts of the people.

He said that while the DSS claimed that the detainess were in the military custody, the army authorities sworn to affidavit in the High Court to the effect that no members of IPOB was in their custody.

Barrister Ejiofor who accused DSS of flagrant breach of fundermental rights of the detainess lamented that most of them, especially the clergymen, were innocent but were unlawfully arrested in their various churches.

He also alleged that others were picked up in the nights thereby making it difficult for families of the detainess to ascertain the identities of the security operatives.

He pleaded with DSS authorities to arraign the detainess in law courts if they have committed any known offence instead of keeping them in unknown detention camps in breach of the 1999 Constitution.

“At a point, we were told that they have been moved to a Military Camp in Kainji where Boko Haram terrorists are being kept but unfortunately, all findings on our parts yielded no fruitful results.

“As Iam addressing you, I can confirm to you that since 2021 when my clients were unlawfully arrested, no one has been allowed to see or access them. Our security should do their work diligently and in line with provisions of the law.

“We are not in Banana republic. We are in democratic era and everything we are doing, including our security agencies, must be in tune with our laws.

At the media briefing attended by wives, children and relatives of the detainess, the counsel pleaded with President Muhammadu Buhari to wade into the plights of his clients by ordering security agencies to file criminals charges against them in law court so as to protect the sanctity of human rights.