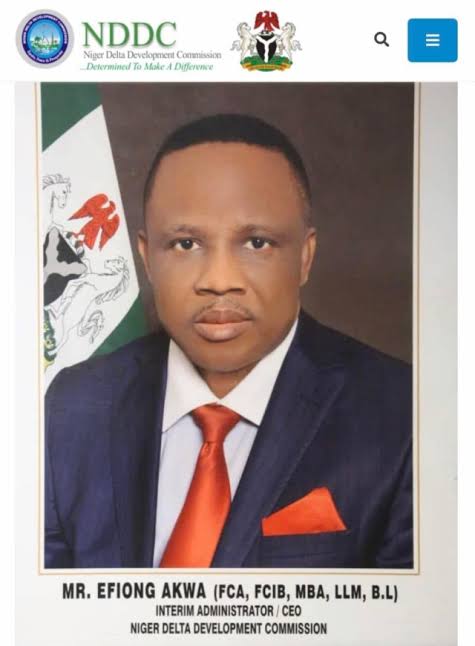 The Association of Niger Delta Contractors have commended President Muhammadu Buhari, for disengaging the Interim Administrator of the Niger Delta Development Commission, NDDC, Mr Effion Akwa, and ordering the constitution of a new Management Team and Governing Board for the NDDC.

In a statement issued on Thursday in Abuja, Sylvester Tonye, President of the group, commended Buhari for listening to the cries of the Association and the Niger Delta region at large.

Reacting to Buhari’s latest directive to the NDDC, the Contractors also appreciated the Minister of Niger Delta Affairs, Umana Okon Umana for his “good works” with the ministry so far.

In the wake of the Nigerian Senate’s invitation of Umana to appear before the House over an alleged N480bn misappropriation, the group said: “The National Assembly should stop their overbearing influence on the incoming Board of the NDDC, as we use this medium to state that the recent N480bn accusation against the Minister of Niger Delta Affairs, Umana Okon Umana is spurious and distractive to the focus and peace of the Niger Delta Region. We support the inauguration of a well meaning Board of the NDDC”.

It would be recalled that the Contractors had among many other demands to the president Buhari, pleaded for the installation of a substantive Board for the NDDC.

An earlier statement issued on Thursday by Deworitshe Patricia, Director of Press in the Ministry of Niger Delta Affairs, had informed that the president has approved the constitution or a new Management Team and Governing Board for the NDDC.

“President Muhammadu Buhari has approved the disengagement of the Interim Administrator of the Niger Delta Development Commission (NDDC), Mr Effiong Okon Akwa from his post with effect from today, 20 October, 2022.

“President Buhari has also approved the constitution of a Management Team and Governing Board of the NDDC in line with Section 5(2) of the NDDC Act 2000.

“The names of the nominees for the new Management Team and Governing Board are to be transmitted to the National Assembly for approval,” the statement read.

Akwa was appointed Interim Administrator of the NDDC for the duration of the Forensic Audit as ordered by Buhari, which the Presidency says has now been concluded.