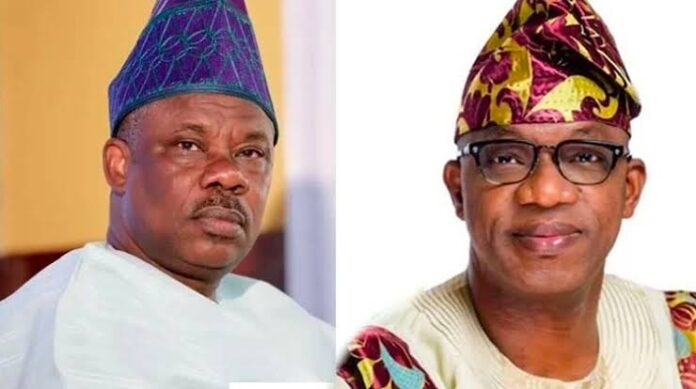 Amosun, who represents Ogun Central Senatorial District in the National Assembly on the platform of the All Progressives Congress (APC) recently expressed his support for Otegbeye while speaking on BBC Yoruba programme.

The support for opposition governorship candidate has, however generated controversy and caused some panic within the APC circle and the state governor, Prince Dapo Abiodun, has reacted saying he would not be deterred by the move.

Speaking with newsmen Friday on the development, Chief Adebayo described Amosun’s move as patriotic, adding that “Otegbeye is a man of high integrity.”

According to Adebayo, Otegbeye is an accomplished lawyer and a successful Chartered Insurer with a Masters Degree in Finance Management, has been described as an attempt to revive a culture of excellence in leadership that Ogun state is known for.

He noted that Amosun has shown an uncommon consistency and unwavering commitment to ensure the emergence of a governor of Yewa-Awori extraction.

“Since the creation of Ogun state in 1976, no one from Ogun West, which is populated by Yewa-Awori people, has been elected governor while the position has been rotated between the other two Senatorial Districts, Ogun East and Ogun Central.

“If discipline and dogged determination had a face, it would be Senator Ibikunle Amosun and Barrister Biyi Otegbeye. The two have shown levels of resilience, courage and persistence in their political career.

“Without doubt, Amosun has shown a great level of courage and conviction in aligning with Asiwaju Bola Tinubu’s unity agenda. Since Otegbeye’s ADC party recently suspended and expelled its Presidential Candidate, this move has given Otegbeye a reason to show a total support for Tinubu just as Amosu. The three chords are complete with Tinubu in the centre: Tinubu, Amosun and Otegbeye”, Adebajo noted.

Comparing the harmony between President Muhammadu Buhari and Vice President Yemi Osinbajo with that of Amosun and Otegbeye, the ADC chieftain said in them Ogun people have found men of honour.

“The good people of Ogun state have found favour in the sight of God with the gift of Asiwaju, Amosun and Otegbeye, an alliance that will become political thematic for further studies. These patriots are genuine loyalists: their commitment to people and to a good cause does not depend on favours or benefits. Amosun’s support for Otegbeye is solely because he has seen what others have not seen: a fertile land who is ready to serve the people of Ogun state. This coalition and affinity are examples of unity of purpose.

“This unexpected decision is still causing some uproar in Ogun State, owing from Amosun’s known affection for Adekunle Akinlade. Since the latter defected to PDP and Amosun decided to take his hands off the political wheels of Akinlade and people began reflecting on the connecting dot between Amosun and Otegbeye, the glaring similarities between these two no doubt, must have led to this unanticipated political marriage”, Adebajo concluded.