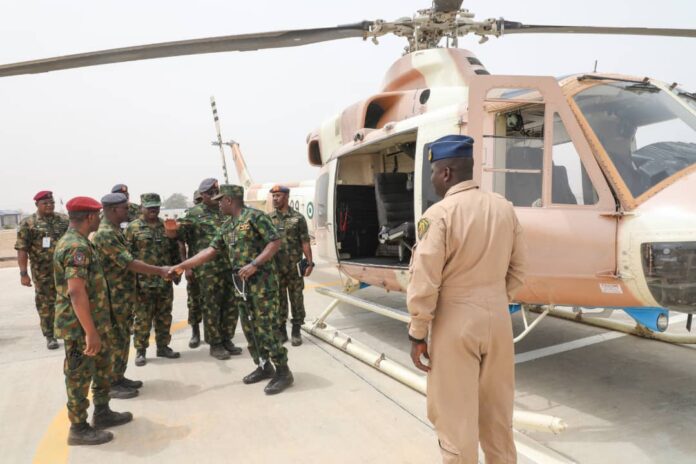 The role of air components is key to achieving positive results in modern day warfare. This is because air surrounds the earth, overlaying the land and sea. Thus, the decisive impact of air power when professionally orchestrated along with land and maritime forces, leaves an enemy in devastating state. The Nigerian Air Force, NAF, knows this, and is already taking advantage of it.

Established in 1964, the Nigerian Air Force is among the elite air forces in Africa. With more fleets in expectation, NAF already boasts of a frightening fleet that will make an enemy tremble. Among its fleet are: Super Tucanos; Dassault-Dornier Alpha Jets; Chinese Chengdu F-7s; JF-17 Thunder Blocks; M-346 FAs; Helicopter Gunships; Armed Attack Drones, and many more.

Italy’s Leonardo Helicopter is set to deliver two units of AW109 Trekker helicopters to the Nigerian Air Force, after the current administration set aside N2bn to complete their procurement. NAF had placed an order for six Leonardo AW109 helicopters in 2019. The equipment is a militarised version of the AW109E that can be armed with heavy machine gun pods and 70 mm rocket launchers. It is also good for aerial scout, reconnaissance, armed escort, troop transport, Search and Rescue, SAR, and medical evacuation. Another N27bn has also been made available for NAF to acquire six units of TAI/AgustaWestland T129 ATAK helicopters from Turkey. The T129 is a twin-engine, tandem seat, multi-role, all-weather attack helicopter based on the Agusta A129 Mangusta platform.

This means nothing more than doom for the enemies of Nigeria’s peace and security. Recently, Nigeria’s Chief of Air Staff, CAS, Air Marshal Isiaka Oladayo Amao, while commissioning the NAF Air Warfare Centre, confirmed that lessons learnt from recent and ongoing operations across the country, has further confirmed the dynamism of air power employment as critical to operational successes, as well as meeting the safety and security aspirations of all Nigerians.

According to a statement by Air Commodore Edward Gabkwet, NAF’s Director of Public Relations and Information, the CAS also noted that air power has become a key determinant of operational effectiveness, as well as a force multiplier in all ongoing operations in the country. “Enhancing and sustaining critical air power capabilities required for joint force employment in pursuit of national security imperatives”, just as it tallies with two key drivers of his Vision, which “focuses on doctrinal development and application of air power in joint military operations” as well as “pursuit of purposeful training and human capacity development”, he noted.

The successes drawn from the deployment of precision air warfare in recent military operations in Nigeria, especially in the northeast and northwest, is over the moon. Successful air strikes have largely degraded the resources and capabilities of terrorists. In September during one of the routine press briefing by the Nigerian Defence Headquarters, Major General Musa Danmadami, Director, Defence Media Operations, DHQ, informed that at least 250 Boko Haram and Islamic State West Africa Province, ISWAP terrorists, were neutralized within two weeks by precision air bombardments.

Only recently, air components of Operation Whirl Punch operating in the northwest, targeted and neutralized scores of foot soldiers in Kaduna State, which has been a base for armed bandits and kidnappers. During the air raid, a notorious terrorist kingpin, Ali Dogo, AKA ‘Yellow’ alongside scores of his loyal fighters were given devastating judgement by NAF. “The Air Component Operation WHIRL PUNCH on 8 October 2022 based on credible intelligence carried out an air strike at Yadi in Giwa Local Government Area of Kaduna State. During the air strikes, a terrorist kingpin, Ali Dogo, AKA Yellow alongside his fighters were neutralized in a building they were said to be hosting a meeting. Yellow and his fighters were said to had relocated to Kaduna State following continued bombardment on his location in Niger State,” Major General Danmadami told newsmen recently at a press briefing.

Similarly, Danmadami informed that on the same day, acting on credible intelligence, some terrorist leaders and their foot soldiers converging under tree covers for a meeting in the northwest of Mando, Kaduna State, were also bombarded, with scores neutralized.

In more recent air successes, scores of fighters including relatives of notorious terror kingpin, Bello Turji, were killed in an air raid carried out by NAF in Zamfara State. The raid which according to reports was largely successful, was conducted around Turji’s hideout in the Fakai community of Shinkafi Local Government Area of the state on a weekend when the terrorists were said to be attending the naming ceremony of a child at Turji’s house. They were caught unawares by the air bombardment. An Air Force source at the Forward Operation Base in neighbouring Katsina, who asked not to be named as he was not authorised to speak with the media, also confirmed the raid.

According to the senior officer, Turji’s whereabout remained unknown after the raid, while other sources alleged that he escaped with serious injuries. Also speaking on the incident, a former Councillor in the Fakai community, who spoke to journalists on condition of anonymity, said the terrorists were inside an uncompleted mosque when the soldiers struck.

“I left the community for some personal business in Shinkafi around 1:58 p.m but didn’t reach my destination when I started receiving calls that the community was under attack. My family thought it was bandits that were attacking but then they called to say it was the air force. I could hear the roaring of the jets,” he said. He further claimed that Turji was not in the town during the attack, and that majority of those killed were his fighters who were inside the Mosque at the time. “If he (Mr Turji) is in the town, everyone knows because you’ll see his fighters with sophisticated weapons protecting his house. The naming was conducted in the morning while the normal women’s event was yet to start in the evening,” he added.

Another resident told newsmen that the military offensive “was very deadly. I saw the bandits running while we were trying to hide outside the community. Everyone was confused but thanks to God that the jets didn’t stay for long, it would have affected some of us, innocent residents”. The raid was carried out by the officers from Operation Forest Sanity and air components of Operation Hadarin Daji using Mi-17 and Alpha Jet, while another aircraft provided surveillance throughout the offensive, a senior personnel informed.

Recently again on October 11, NAF’s Super Tukano conducted large scale of bombardments at Gargash and Ngauri Boko Haram hideouts in Bama Local Government Areas in Borno States. The A-29 Super Tucano is a Brazilian turboprop attack and counter-insurgency aircraft, which carries a wide variety of weapons, including precision-guided munitions. Since its acquisition, it has boosted NAF’s air prowess, and has done commendable damage to the enemy. Thus, the Bama bombardment scored devastating impact, as scores of the terrorists were barbacued in the process. The unlucky insurgents were said to be those who coordinated attacks in Kumshe, and were planing to attack troops in Mayinty or Darajemal before they were hit by the Air Force strikes. Damage assessment indicated that scores were consumed.

In the bombardment/ambush carried out by Air Component of Operation Hadin Kai and land troops of Troops of 152 Battalion Banki, Operation Hadin Kai, the deployed Super Tucano delivered accurate hits. A Counter-insurgency/Security Expert in the Lake Chad region, Zagazola Makama, who confirmed the the attack, said troops staged an ambush following an Intelligence report that dozens of Boko Haram terrorists had been troubling commuters and robbing them of their valuables in the area.