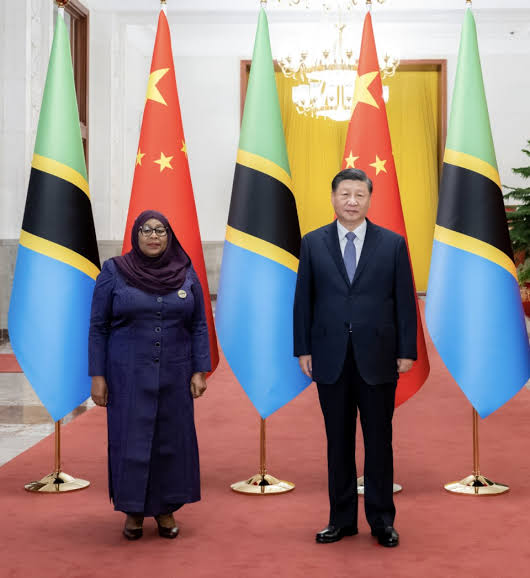 China and Tanzania have enjoyed a long-lasting friendship and comprehensive cooperation, and the development of the relations is being promoted at a higher level with Tanzanian President Samia Suluhu Hassan’s arrival in Beijing for a three-day visit.

The two countries on Thursday announced the elevation of bilateral relations to a comprehensive strategic cooperative partnership during Chinese President Xi Jinping’s meeting with Hassan, the first African head of state China received after the 20th National Congress of the Communist Party of China.

A ‘true and reliable’ China-Tanzania friendship

Noting that the two countries should take the comprehensive strategic cooperative partnership as a guide to advance cooperation in various fields in the next stage, Xi said China will continue to import more Tanzanian products, support Chinese companies in investing and doing business in Tanzania and provide assistance for Tanzania’s economic and social development.

He said China has always viewed its relations with Tanzania from a strategic perspective and has always been a reliable friend.

Hassan said Tanzania regards China as a “true and most important friend” and is willing to be a trusted partner of China forever.

She said Tanzania will continue to firmly support China on issues concerning China’s core interests, such as the issues related to Taiwan, Xinjiang and Hong Kong.

The two sides also issued a joint statement on establishing a comprehensive strategic cooperative partnership, covering issues such as leveraging the guiding political role of head-of-state diplomacy, elevating two-way trade, and strengthening coordination and cooperation in international affairs, among others.

Building a China-Africa community with a shared future

In 2013, during his visit to Tanzania, Xi put forth the guiding principles of China’s policy toward Africa, namely sincerity, real results, affinity and good faith, which have since become China’s basic policy on pursuing solidarity and cooperation with other developing countries.

Xi told Hassan that under the new circumstances, the sound development of China-Tanzania relations not only serves the common and long-term interests of the two countries but also is of great significance to building a China-Africa community with a shared future in the new era.

China is ready to create new opportunities for Africa with its new development, take infrastructure as the guide, strengthen cooperation in trade, investment and financing, and foster new drivers of China-Africa cooperation, he said.

Hassan said her country will join China in taking the establishment of a comprehensive strategic cooperative partnership as an opportunity to strengthen practical cooperation in various fields and build bilateral relations into a model of Africa-China relations in the new era.

FOCAC is an effective platform and multilateral mechanism for China and African countries to conduct collective consultations and carry out pragmatic cooperation.

Since the establishment of FOCAC, Chinese enterprises have built more than 10,000 kilometers of railways, nearly 100,000 kilometers of roads, nearly 1,000 bridges, nearly 100 ports and a large number of hospitals and schools in Africa, said Chinese Ambassador to Tanzania Chen Mingjian during a conference on China-Africa cooperation through FOCAC in Tanzania’s Dar es Salaam in October.

In 2021, China-Africa trade volume was $254.2 billion, and China’s stock of direct investment in Africa exceeded $56 billion, 25 times and 100 times that of 2000, when the forum was established, respectively, according to the Chinese envoy.