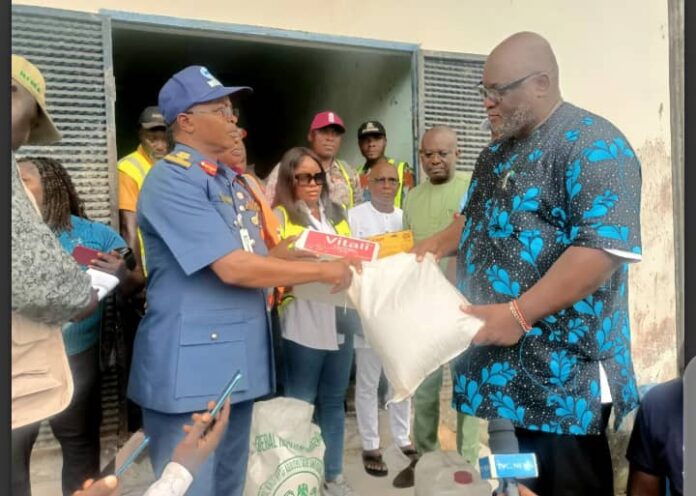 The National Emergency Management Agency (NEMA), on Thursday said, His Excellency President Muhammadu Buhari, GCFR has approved the release of 12,000 metric tons of assorted grains from the National Strategic Reserve Stock for distribution to all states of the federation including Bayelsa state.

Presenting the food items and other relief materials to the Bayelsa State government, the Director-General of NEMA, Mustapha Habib Ahmed, said the unfortunate flood incidents have resulted in loss of lives, human displacement, loss of means of livelihoods and socio-economic dislocation.

Represented by the Director of Search and Rescue in NEMA, Air Commodore Edward Kolawole Adedokun, Ahmed stated that the items were expected to give succour to the most vulnerable groups of persons, who were displaced by flood.

He said, “Banditry and economic downturn and pre-harvest food shortage has increased the vulnerability of a segment of the populace in the recent past.

” In this regard, the Zonal Office of NEMA has continuously worked with the Bayelsa State Emergency Management Agency (SEMA) to conduct damage and loss assessments to guide relief intervention to persons in need of support in Bayelsa state.

“Others include 98.7 metric tons of garri (3,948 bags of 25kg) The grains will be distributed directly to the deserving persons in collaboration with officials of the Bayelsa SEMA and the NEMA Zonal Office.

“Furthermore, the additional approved relief materials in form of food and non-food items to further support persons affected by the flood disaster in Bayelsa state.

“Yet we have to help people to get back on their feet and restart normal life with this type of relief intervention. The relief intervention is a testimony that the Federal Government through NEMA is always concerned about the welfare and wellbeing of the good people of Bayelsa State.”

While receiving the items, the State Commissioner for Agriculture, Mr. David Alagoa thanked the Federal government for the flood relief materials.

Alagoa said, “we were beginning to think we are not part of this country. Its better late than never. This is the beginning of relationship than end of it.”