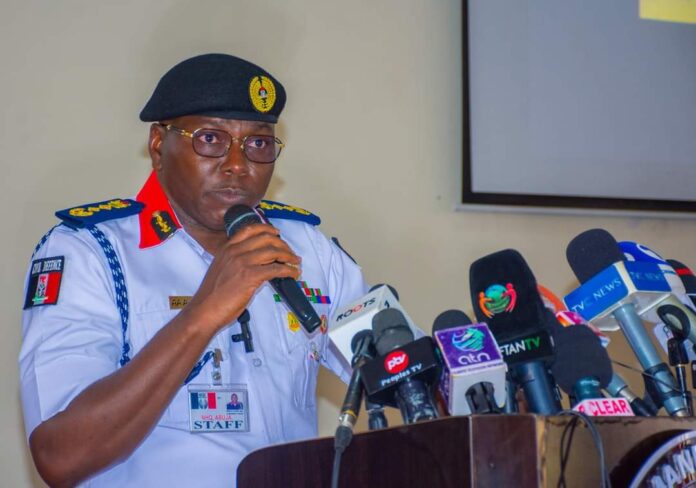 Commandant General of the Nigeria Security and Civil Defence Corps, NSCDC, Dr Ahmed Abubakar Audi has assured Senior Officers of the Corps that, the 2022 Promotion Examination would be conducted in adherence to the principle of transparency and fairness as modalities were in place to ensure that officers qualified for promotion to the next ranks are not left uncatered for.

In a press statement issued by DCC Olusola Odumosu, NSCDC, Director of Public Relations, today, Audi intimated that promotion of Senior Officers in the Corps remains an exclusive preserve of the Civil Defence Correctional Fire Immigration Services Board, CDCFIB and it was based on performance evaluation, availability of vacancies, quota system among other considerations.

He reiterated that within just a year, he paid 4 years out of the 6 years backlog of promotion arrears he inherited from past administration and also working assiduously to clear the rest through government support and intervention.

He maintained that under his watch, the era of junior officers getting promotion before their seniors is gone.

He advised eligible officers sitting for the year 2022 promotion examination not to engage in any conduct that is inimical to the corporate image of the Corps, assuring that due process would be followed as always.

“I urge my officers to shun the habit of lobbying to get promotion through backdoors and other influential people.

“This is uncalled for and also giving our administration bad reputation as those who does not have anyone to influence for them are misled to believing that the CG is the one responsible for the lopsidedness, thereby causing insinuations that the CG is conducting arbitrary promotions and favouring selected few.

“The Minister of Interior, Ogbeni Rauf Aregbesola who doubles as the Chairman of the Board is solely committed to meritocracy, transparency, fairness and justice in the entire promotion process and nobody should expect less this time around”, he assured.

He explained that every personnel of the Corps are special and dear to him, hence, he would treat everyone fairly and equally.

“I am CG to all and not to a few officers and men, therefore, anyone expecting me to favour him or her at the expense of others will be disappointed”.

“Promotion in the Public Service is by Seniority amongst other requirements and we are going to uphold that”, he emphasized.

He further congratulated all eligible officers writing the promotion exams and wished them success.

“On this note I congratulate all of you writing the examination and wish you best of luck as you move on in your career.

“I know you must have studied hard but also maintain decorum, respect and conduct yourselves as disciplined and well trained officers, so the world would know that we are organised people in NSCDC”, Audi said.