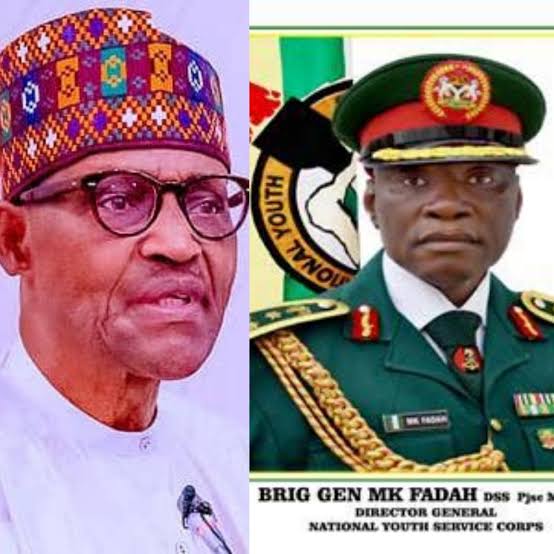 The Centre for Social Justice, Equity And Transparency (CESJET) has welcomed the removal of Brig Gen MK Fadah as the Director-General of the National Youth Service Corps (NYSC), describing him as unfit for the position.

The Centre, at a press conference today, in Abuja, commended President Muhammadu Buhari for acting promptly to save the Scheme from further embarrassment.

In his address, CESJET’s executive director, Comrade Isaac Ikpa, said Fadah demonstrated a lack of vision and purpose for the NYSC and was rightfully shown the exit.

“As an organization dedicated to good governance in Nigeria, we welcome the decision of President Muhammadu Buhari to relieve the NYSC DG of his position, which is long overdue. Brig Gen MK Fadah has been a misfit from the first day he assumed office. He displayed a lack of vision and purpose for achieving the mandate of the critical NYSC,” Ikpa said.

“It is on record that the past six months have been the most unproductive era in the annals of the NYSC as the erstwhile DG turned the NYSC into a fiefdom where his cronies took over the operations of the scheme to the detriment of directors and head of departments.

“It was an era of nepotism and backwardness on the reforms introduced in the scheme by previous leadership. It, therefore, was no surprise that the erstwhile DG engaged in acts that were unbecoming of a senior officer of the Nigerian Army.

“The era of Brig Gen MK Fadah at the NYSC was laced with forgery and incapacity to deliver results when it matters most. Instead, he went on a spending spree, diverting funds meant for corpers welfare and other sundry matters.

“We would like to inform the general public that Brig Gen. MK Fadah forged his academic qualifications and falsified his age, which an investigation by the NYSC Board revealed.
Therefore, it is a shame that such an anomaly would happen in an organization central to youth development in the country. Therefore, the decision of President Muhammadu Buhari to relieve him of his appointment is a step in the right direction in halting the decline in the NYSC.

“The Centre for Social Justice, Equity and Transparency hold the firm conviction that Brig. Gen. MK Fadah should be court marshalled for forgery and falsification of age that aided his appointment as NYSC DG.
There should be no sacred cows, and as such, we are calling on the Mr President and other relevant government agencies to act in the country’s best interest if we are indeed desirous of building the country of our dreams.
Brig Gen MK Fadah was despicable in his conduct, which negatively affected the operations of the NYSC. The morale of staff and corp members were at its lowest ebb in the last six months. Consequently, we must agree that Mr President acted in the country’s best interest. We salute the courage of President Muhammadu Buhari in this regard, which is a demonstration of a leader who listens and is conversant with the happenings in the country”.

The Centre, therefore, called on the Chief of Army Staff to “do all necessary to reprimand Brig. Gen. MK Fadah for bringing the revered Nigerian Army into disrepute before the general public.”