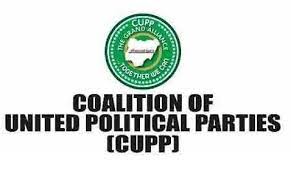 Coalition of opposition political parties operating under the aegis of Coalition of United Political Parties,CUPP has alleged that it has intercepted plan by the ruling All Progressives Congress, APC to rig the 2023 general elections through vote buying.

The opposition political parties at a nationwide broadcast yesterday alleged that APC plans to carry out digital vote buying following their inability to continue the usual cash vote as a result of the new naira redesign policy.

The spokesperson of the opposition political parties, Ikenga Imo Ugochinyere said the new plot of digital vote buying termed operation Wire-Wire by the CUPP will see to the APC harvesting names, account numbers and Voters Identification Numbers, Bank Verification Numbers of citizens, arranged in tables for each polling unit on the understanding that money will be sent to each person by electronic means to purchase their votes.

It claimed that information available to it shows that bank details of over 10 million voters have been harvested by agents of the ruling party nationwide using different platforms to harvest the bank details and in a plot designed soon after the Central Bank of Nigeria announced the policy to redesign the Naira.

“This plot which has now received the approval at the highest level of the APC and its Presidential Campaign Council was also designed in Imo State and exported to 21 other states of the federation requires the party’s agents harvesting names, account numbers and Voters Identification Numbers, Bank Verification Numbers of citizens and arrange them in tables for each polling unit on the understanding that money will be sent to each person by electronic means to purchase their votes.

“In Imo and Ebonyi States, this plot was being executed under the platform of Support Group Coordination, South East while in other parts of the South East like in Abia, Enugu and Anambra it is being executed as All Progressives Congress Empowerment Form.

“In Katsina State and other parts of the North West, the plot was being executed under the Citizens Grassroots Farmers Association, in Ekiti State, they are operating under the Ekiti Development Front (EDF).

“In the North Central, Operation Wire-Wire was being executed under the North Central Women for Tinubu. In Cross River State, the details are harvested under the Forum of Tinubu Support Groups. In the rest of the country, the APC is harvesting details using the Vote Canvassing Form”, he further alleged.

The CUPP therefore called on the Banks and the Security Agencies to work together by identifying the illegal transactions in the banks and reporting the same to the security agencies for immediate prosecution of the perpetrators.

Mr. Ugochinyere went further to release damning evidence of this plot in several leaked documents that shows the harvested names and bank accounts for the alleged digital vote buying in those states.