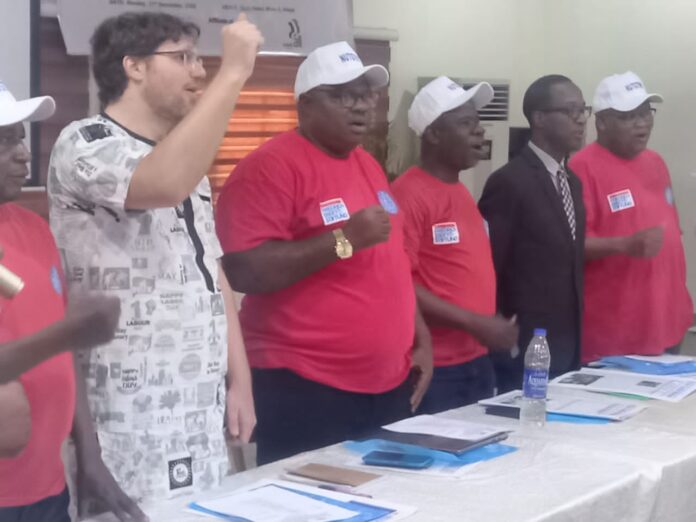 National Union of Textile Garment and Tailoring Workers of Nigeria ((NUTGTWN) has urged the Federal government to take urgent steps to review its policies and consider tax waivers for textile industries to encourage investment and encourage fair competition.

President of the Union, Comrade John Adaji, stated this while speaking during policy dialogue on sustainable industrialization and employment in Nigeria organised by the Union in collaboration with the Friedrich-Ebert-Stiftung (FES) in Abuja on Monday.

Adaji said smuggling is the major killer of textile industry in Nigeria, saying that the issue of smuggling must be decisively dealt with if we are to keep the remaining industries and employment in the sector.

He said the federal government must show strong political will to revive the textiles industry, noting that there is still a huge gap between official policy pronouncements and implementation.

He said years of sustained advocacy and campaign for sustainable development and industrialization through the policy dialogue series have resulted in several achievements including N100 billion cotton, textile and garment intervention fund among others.

He said, “These activities have helped to keep in focus at national level issues of industrial development and the imperative of supportive policies. It has promoted increased interaction between the critical stakeholders paving way for constant review and feedback. The union’s pressure continues to promote active awareness and public discussion on the future of textile industry in particular and manufacturing in Nigeria.

“Today, there is official recognition of the importance of industry and the need to protect local industry, create mass decent jobs and diversify the nation’s economy. It has resulted in specific policy intervention like the 100 billion cotton, textile and garment intervention fund among others.

“There is also the official recognition that we must produce what we consume and consume what we produce. Conscious effort is also being made to address the problem of financing as it affects the key sectors of the nation’s economy through the Central Bank of Nigeria (CBN) intervention funds.

“The government is also making concerted effort to promote the ease of doing business in Nigeria. Cotton, textile and garment (CTG) policy is in place to revamp the textile and garment industry. There are automobile industry policy and power sector reforms. The long debated Petroleum Industry Bill (PIB) has been signed into law while conscious effort is being made according to the Federal government to revive the iron and steel sector and rebuild basic infrastructure. Launching of the Nigeria Industrial Revolution Plan (NIRP).”
End

Also speaking, the Director of Industrial Development in the Federal Ministry of Industry, Trade and Investment, Adewale Bakare noted that in some countries like India, the role of government in promoting the textile soctor was minimal.

Bakare, who was represented by the Chief Industrial Officer in the Ministry, Mukhtar Abdullahi, said it was the private sector that drives the industries.

He said that there is the need to change strategy for the association to move forward, recommending that a committee made up of the government and the association should be set up in order to move the sector forward.