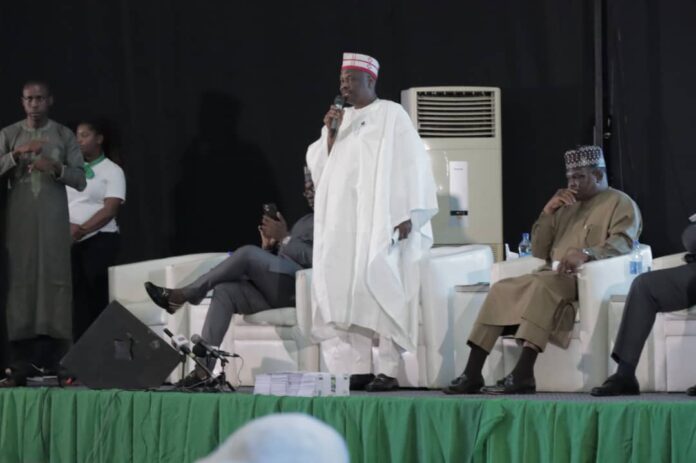 Presidential Candidate of New Nigeria People’s Party, NNPP, Alh. Rabiu Musa Kwankwaso has said NPP has over a hundred documents on Nigeria’s challenges and solutions to profer to such, and stands as the only hope for the country in the 2023 general elections.

Speaking alongside some other candidates from other political parties, at a One DAY regulated presidenties Town Hall Meeting organised by New Dream For Grassroots Development, NDGD to mark the oficial Flag-off of, the ‘NewNigeria Dream’ Project.

The former Kano State Governor stated that his movement to the New Nigeria People’s Party NNPP had followed a trajectory of the discovery of failures from other parties since his term as Governor from 199-2003 under the People’s Democratic Party, PDP, to his intention to join the NNPP which he said remains the solution to Nigeria.

Kwankwaso went on to say that the party has since March, 2022, registered millions of followers across the 8,809 Wards of the 774 Local Government Areas of the 36 States and the FCT, adding that the party has over 152:documents to Nigeria’s challenges, with solutions to them.

The NNPP candidate outlined some of his records in various capacities of leadership in areas of Education, Healthcare, infrastructure, security, amongst others from his days as Governor of Kano State, legislator, Minister, till date.

He recalled how he built over 300 schools in Kano State, as well as hospitals in two universities, sponsored about 3000 non-indegent Kano residents to study in various schools abroad.

Kwankwaso also promised to increase the number of the police force and the military to over a million, using e-tech to monitor their activities if given the mandate to become Nigeria’s president, as well as create more jobs for the teeming unemployed youths of the nation.

“Our party today, is the only one that has well documented issues of problems and challenges in this country with the solutions. We have over 152 page document and of course, going by my antecedents in governance, which I believe that the NNPP is the best solution to the crisis we find ourselves in today,” he said.

Also, candidate of African AAction Congress, AAC, Maj. Hamza Al-Mustapha, (rtd) said Nigerians would need to study historical antecedents from 1957 till date in order to be able to profer solutions to the sufferings of the people.

The grey areas of interest on the list of his party’s agenda he said include; dignifying women, children, the elders, security, maintaining the integrity and sovereignty of the country.

Reacting to the current security challenges in the country, he lamented that Nigeria has found herself in a hopless situation by patronising the sponsors of the insurgents by merging the police with the military.

“We have been wasting time doing nothing by simply making our armed forces road bound while the real theaters of war lye in the forests and hinter land,” Al-Mustapha raged.

The former military officer then noted that his government will introduce an e-economy,

While giving the assurance that his adminstration would establish smaller security forces to man the forest zones, he also added that it will also introduce e-economy for ease of doing business across the country, with an investment.

Addressing the issue of power supply, the AAC candidate stressed that it is a very vital aspect that fuels other sectors of the economy, but was quick to blame the current deficit on what he called the 1972 agrement on the sector.

“Every topic we are talking about from 1957 till now, is what we are aware of but we are down to earth, and that is why we have been drawn to patriotism to have conducted investigations we did, so we are being guided by the damages done and the formulars now innovated, by the opportunities tomorrow will offer.

“On power supply, Nigerians were deceived and cheated! Restorting Nigeria back on her track is a war you must to fight,” Al-mustapha stressed.

As for National Renewal Movement, NRM candidate, Rev. Felix Johnson Osakwe, Nigerians should be optimistic about the dawn of a new era come 2023, a year he said will usher the old leaders whom he said should rather be playing the roles of supervisors and elder statesmen order imposing themselves on seat periodically.

He further went on, urging Nigerians to question the track records of the 18 presidential candidates for the 2020 elections.

He again noted, “We should as a matter of fact, investigate all the performances and lifestyles of all our 18 candidates so that we can get tambition ght in the forthcoming 2023 elections.

“It is however sad that most Nigerians still praise bad leaders.

Speaking on his ambition for the number one job of the country, Osakwe, who is also a clergyman and has been based in the US for over three decades noted that his role as General Overseer of a church, makes him capable to surmount the presidential seat.

According to him, most Nigerians, “do not know about accountability”, as he also tasked the citizens to ask critical questions about insurgency across the country.

The G.O further assured that if voted in as president, his administration will revamp the country’s economy, with focuses on; Agriculture, steel mining and tackling corruption which he mentioned as the key player responsible for the challenges across the nation.
Focusing more on the country’s Energy supply, the candidate of Young Progressives Party, YPP, Ado-Ibrahim Abdulmalik, said Nigeria’s challenges cannot be solved in four years, but he however promised to bring about a new Nigeria through gradual process.

He frowned basically at the poor state of power which he described as the propelling factor for any economy to thrive, saying the country needs to focus more attention on the development of solar energy to meet up with most countries across the globe.

In his analogy, the candidate explained how he has built about 20kw energy generation in countries and an ongoing project of about 6mw capacity of solar power in Adamawa, as well as track records of his works in over 18 countries of the world.

For him, presidency requires; bravery,courage, and one who can truly unite the people.

“The biggest problem Nigeria has is not Nigerians stealing from the country but what other countries steal from Nigeria,” he added.

The whole candidates were unanimous in their views on Nigeria’s electricity, which they decried in its entirety.

Also speaking, Director General, NDGD, H.E Dr Onwubuya Breakforth in his special remark, noted that the NNDI, which is a Project of New Dream for Grassroots Development, with millions of members Spread across the 8,809 Wards of the 774 Local Government of the 36 States of the federation and the FCT in conjunction with Media Organisations had put up a One Day Townhall summit to meet with presidential candidates to enquire about their programmes for the country’s future.

Some of the other presidential candidates were however represented by their running mates and did not participate in the discussion while former Anambra State Governor, H.E Chukwu Emeka Ezeiefe, who was a special guest, sued for a new Nigeria of our dreams.