…Says Nigeria can’t be a pariah in comity of Nations

Following the release of certified true copy of the indictment and forfiture of $460,000 for drugs trafficking and money laundering by a United States Court, a group, the Centre for Reform and Advocacy (CRA), has petitioned the Attorney General of the Federation, Abubakar Malami, to prosecute the presidential candidate of the All Progressives Congress (APC), Asiwaju Bola Tinubu, for narcotics trafficking and money laundering.

It also issued a five days ultimatum to the AGF to comply with the demands or face legal actions.

CRA in a letter dated November 14, 2022, further urged the AGF to direct the National Drug Law Enforcement Agency (NDLEA) to investigate and take necessary legal actions against the APC candidate.

This is even as it recalled an earlier correspondence tagged annexure “A” where it asked the NDLEA Chairman to invoke Section 18 of the Money Laundering (Prevention and Prohibition) Act, 2022, against the former Lagos State governor for his involvement in the alleged crime. 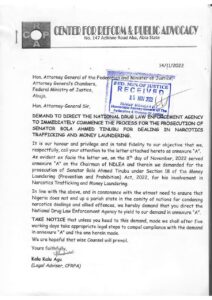 The letter signed by CRA Legal Adviser, Kalu Kalu Agu, and made available to newsmen Sunday in Abuja, reads in part; “It is our honour and privilege and in total fidelity to our objective that we, respectfully, call your attention to the letter attached hereto as annexure “A”.

“As evident ex facie the letter we, on the 8th day of November, 2022 served annexure “A” on the Chairman of NDLEA and therein we demanded for the prosecution of Senator Bola Ahmed Tinubu under Section 18 of the Money Laundering (Prevention and Prohibition) Act, 2022, for his involvement in Narcotics Trafficking and Money Laundering.

“In line with the above, and in consonance with the utmost need to ensure that Nigeria does not end up a pariah in the comity of nations for condoning narcotics dealings and allied offences we hereby demand that you direct the National Drug Law Enforcement Agency (NDLEA) to yield to our demand in annexure “A”.