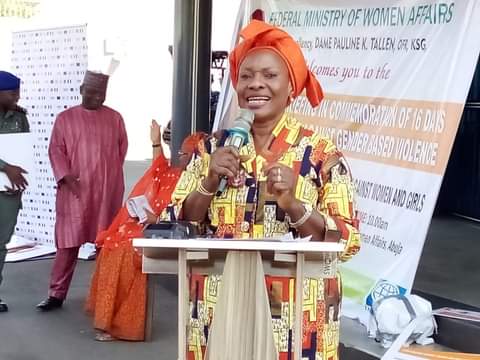 Minister of Women Affairs, Dame Pauline Tallen has rallied all to action to curb the menace of Sexual Gender Based Violence also stressing the need for prevention of SGBV, and for perpetrators to be brought to justice, and for victims to be given a voice as part of the long process of healing.

Dame Tallen described the theme of the 2022 edition of 16-Days of Activism against Gender-Based Violence which is “Unite! Activism to end Violence Against Women and Girls” as “building on our collective responsibilities to end Gender-Based Violence in the country either as Media partners, Policy makers, Individuals, Development partners, Civil Society Organizations, Law makers, even as young women and men.”

Dame Tallen was speaking while flagging off the activities to mark the 2022 edition of 16-Days of Activism against Gender-Based Violence which runs from 25th November, to 10th of December, 2022.

The 16 Days of Activism against Gender-Based Violence is an annual international campaign which kicks off annually on 25 November; designated by the United Nations, UN, as the International Day for the Elimination of Violence against Women and runs until 10 December, which is another important event designated as Human Rights Day.

At the flag-off, she called for a minute silence in honour of those who lost their lives as a result of sexual and gender-based violence, SGBV.

While highlighting several steps and advocacies staged by her Ministry to reduce the menace of SGBV or even curb it from our society, the Minister revealed that that the Ministry carried out several survivor-centred essential services across policing, justice, health, and social sectors, and improved financing for women’s rights agenda.

With that, the Minister declared her near satisfaction that “It is on record that more than ever before, survivors are now speaking out and reporting these violations and seeking for legal and judicial assistance.”

She stated that “the idea behind this domestication is to strengthen the justice system and the prosecution of the perpetrators of violence against vulnerable women and children; including the girl-child.”

The Minister further said that “the HeforShe strategy and integrating domestication of laws by States” are “criteria to access our various Women Economic Empowerment and Poverty reduction schemes.” To her, these strategy “have proven effective in ensuring a society that thrives on zero-tolerance to Gender-Based Violence.”

The Minister’s audience at the flag-off event was composed of Ambassadors of foreign countries such as U.K, Canada, Spain, Namibia and even European Union.

Earlier, while speaking through Mr. Idris Muhammed, the Director of Economic Services, the Permanent Secretary of the Ministry, Alhaji Shehu Aliyu Shinkafi said the commitment of the Ministry to protect women and girls against any form of violence is sacrosanct.

The Permanent Secretary thanked development partners for supporting the Ministry to spotlight the issues of GBV and bring them to the front burner in the elimination any form of violence against women and girls.

Each of the agencies and organizations which rallied to the support of Federal Ministry of Women Affairs gave goodwill remarks which pledged continued support to the Ministry beyond the tenure of Dame Pauline Tallen who is championing her last edition of 16-Days of Activism against GBV as Honourable Minister of Women Affairs since Nigeria is preparing for transition to a new administration in 2023.