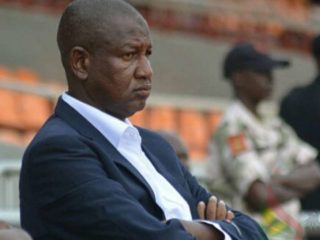 Facebook
Twitter
Pinterest
WhatsApp
Plateau United coach Abdu Maikaba has lamented the impact of the recent #EndSars protests across the country on his team’s preparation for the 2020/21 CAF Champions league.
The Peace Boys have been drawn against Tanzania champions Simba in the preliminary round of the competition, and will host their opponents in the first leg on the weekend of 27-29 November before travelling to Dar es Salaam for the second leg a week later.
Though the 2017 Nigeria Professional Football League (NPFL) champions participated in the recently-concluded Gov. Masari preseason tournament in Katsina, Maikaba says the dust-to-dawn curfew imposed in Jos – which was an aftermath of the protests – disrupted his team’s preparations.
“We have been trying to put things in order to commence our preparation especially for the CAF Champions League and the domestic league,” the ex-Wikki Tourists gaffer said.
“The only problem we have is the issues that came at one time or the other, like the issue of EndSars protest. That time happened to be when we resumed training after about six months because of coronavirus lockdown.
“After that, the whole town (of Jos) had to go under curfew, which was due to the EndSars protest and the looting of palliatives.
“It made it very difficult for us to even commence training. So, we decided to register in a preseason competition in Katsina even without training the players. We used that avenue to play some games and train at the same time.”
Plateau United and Enyimba will fly Nigeria’s flag in the upcoming CAF Champions League, after they finished first and second respectively in the NPFL last season using the Points Per Game (PPG) tabulation.

Borno: Killers of rice farmers must not go unpunished – ECOWAS...

Afolabi Johnson - December 3, 2020 0
ECONOMIC Community of West African States, ECOWAS, Commission has called on the federal government to bring the killers of the rice farmers in Borno...

Afolabi Johnson - November 9, 2020 0
Governors, leaders and stakeholders from the South-East have appealed to the federal government to look into the demands of youths with the aim of...