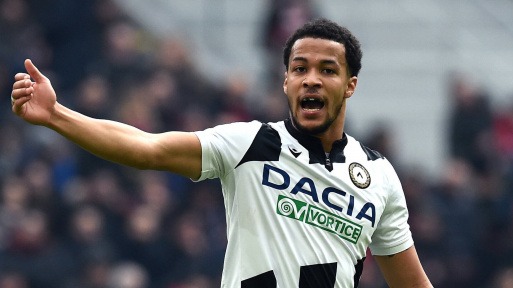 Facebook
Twitter
Pinterest
WhatsApp
Watford of England defender, William Troost-Ekong is beaming with confidence ahead of his impending outing with the Super Eagles against Sierra Leone his Friday in Benin City, with a verdict that he will be able to give his very best because of the new experience he has gained from playing in the English Championship.
Megasportsarena.com reports that, while acknowledging that he also learnt a lot from lining out for Udinese of Italy in the Italian Serie A, from where he moved to Watford in the summer, the Eagles’ assistant captain declared emphatically that his game has progressed in leaps and bounds.
The former Tottenham Hotspur of England youth tem player, who has also featured in the past for Dordrecht of Holland, Haugesund of Denmark, KAA Gent of Belgium and Bursaspor of Turkey, stressed that a lot more has been added to his quality after lining out for Watford in England’s lower division.
Having already made five appearances and scored a goal for The Hornets, who are currently placed second in the Championship log, with 21 points from eleven games, Troost-Ekong admitted he is enjoying his time at Vicarage Road, but conceded that he will still have to think well before deciding his future after the season.
He added that he has no regrets for dumping Udinese for a second-tier team in a five-year deal that will keep him at Vicarage Road until June 2025 but, while standing by his decision to join Watford, Troost-Ekong posited that he will assess the club’s progress before making a decision on his future.
Troost-Ekong concluded: “I enjoyed myself in Udinese, I think everybody saw what I can do there and I believe in the project for Watford to go back to the Premier League so we are working on that this season.
“I enjoyed myself in Serie A but I’m ready for a new challenge, we’ll see how it works out but I believe in it. For me regular football was important, the Championship is a very competitive league. We’ll see by the end of the season how that has gone and then we’ll make a decision again.”

Afolabi Johnson - December 5, 2020 0
*Buratai predicts Nigeria likely to suffer terrorist attacks in next 20yrs *Says there is a general misunderstanding of what terrorism entails *That it depends on the...

FG’s impediment to Buhari’s Executive Order No.10: Way forward for the...

Afolabi Johnson - December 2, 2020 0
The judiciary as one of the three arms of government seems to be the weeping boy of the executive and legislature in the Nigerian...