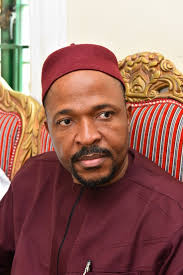 Hon. Chukwuemeka Nwajiuba is a man of many parts, he is a legal luminary, an astute legislator, a sagacious administrator, former Executive Chairman of Tertiary Education Trust Fund board of Trustees, a conscious and intentional politician with the masses at heart, and the current Minister of State for Education.

Nwajiuba was born shortly after the broke of the Biafra war on 20th August, 1967 at Umuezeala Nsu in Ehime Mbano Local Government Area of Imo State, Southeast Nigeria.

He started early to exhume excellent academic performance and after his primary and secondary education with flying colours, Nwajiuba meritoriously gained admission into the Imo State University where he bagged a Bachelor of Laws (LLB) degree and was called to the Nigerian bar in 1989.

Hon. Chukwuemeka Nwajiuba, HCN, as he is affectionately called by his teeming admirers is happily married with two blessed children.

He began his career as a managing partner of Ayodeji C. Emeka Ibrahim & Co. in I991.

Dr Nwajiuba was elected a member of the House of Representatives in 1999-2003 where he served as House Committee Chairman on Land, Housing and Works.

Hon. Nwajiuba was the Chairman of the Tertiary Education Trust Fund from 2017-2019 where he made remarkable achievements within his short stay.

In 2019, he was reelected member of the Okigwe North Federal House of Representatives under the Accord Party. But for the trust President Buhari reposed on him, Nwajiuba was nominated for a ministerial position and was successfully screened as he was cheered by the honorable members of the National Assembly who asked him to simply take a bow and he subsequently became the honorable Minister of state for Education of the Federal Republic of Nigeria, a position he is currently occupying.

A strong pillar in the cog of the All Progressives Congress, Hon. Chukwuemeka Nwajiuba is also a member of the Presidential Task Force on Covid-19.