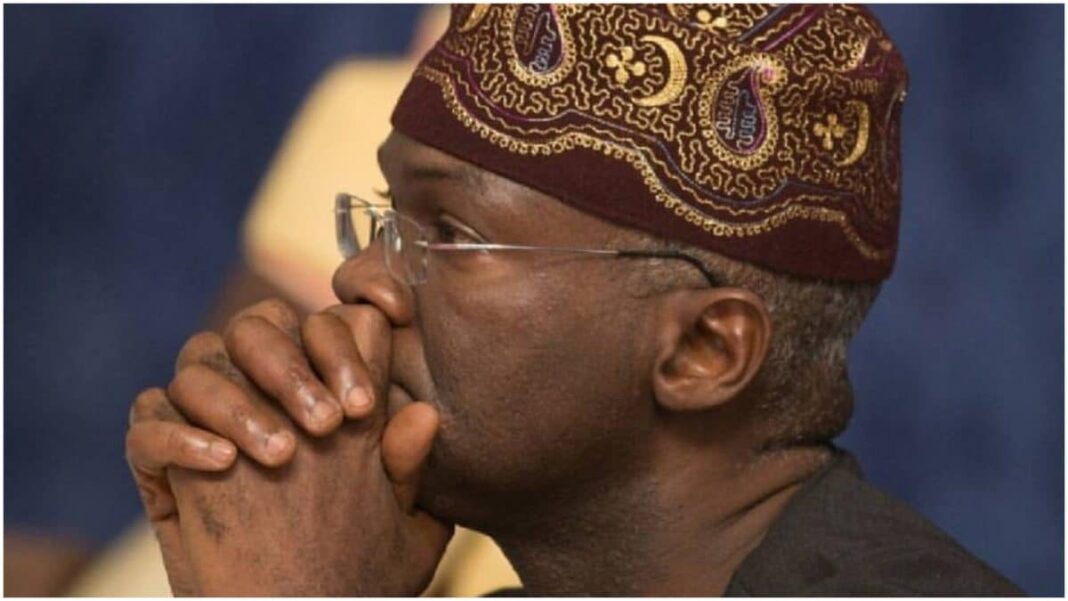 Civil Society Groups for Good Governance, CSGGG, have condemned publications by two major media platforms indicating the then Minister of Power, Works and Housing, Babatunde Fashola of illegal payment of ₦4.6 billion into the personal accounts of some officials.

In a press statement, Comrade Ogakwu Dominic described the action of the platforms as a malicious attempt to tarnish the good image of Babatunde Fashola, cause chaos, and mislead Nigerians.

Ogakwu stated that the media as the watchdog of the society should embrace the need to tow the path of confirmation, balancing perspectives in its reportage instead of being biased just to gain popularity and gain more audience.

He reiterated that getting clarifications and disseminating the appropriate information is key and the unity of our Nation is non-negotiable.

The statement read in part, “Our Organisation, Civil Society Groups for Good Governance, CSGGG, an assemblage of over 180 civil society organizations, totally committed to advocating for patriotism, truth, voice, and accountability platform that consciously breed transparency and neutrality, have observed with staggering consternation the recent publication by some online newspapers on 16th November 2020, themed: INVESTIGATION: Authority Stealing: How Fashola’s Ministry illegally paid ₦4.6BN into officials‘ personal accounts and How Ministry Headed By Ex-Lagos Governor, Fashola, Illegally Paid ₦4.6bn Into Officials’ Personal Accounts, indicting and dragging through the mud the Ministry of Works, Power, and Housing headed by Babatunde Fashola.

“First, it is very imperative to note that the role, the media can play as the watchdog of the society is indispensable, hence the urgent need to also remember that information should not be published until adequate research is made and its coherence and completeness are achieved, because misleading reports are capable of creating chaos, causing panic and hatred which could be detrimental to national development.

“The above assertion is premeditated on the fact that as the Fourth Estate of the realm and as an organization averse to dishonesty, subterfuge and other sharp practices, we have duly made research and carried out an independent investigation into the allegations above-mentioned, and it is on this note that we have decided to let the media in on the facts.

Also, the CSOs decried what they described as constant misreport against the person of Fashola during his time in office as the Minister of Works and Housing, who was accused of paying into accounts monies amounting to N4.6 billion.

“It may interest you to know that Olasehinde Micah, Ogueri Ugochukwu Pascal, Oluwadare Festus Oluwatayo, Adekunle Ogunfadebo, and Ahmad Mohammad, were all projects accountants of the Ministry.

“Monies paid into their accounts were meant to finance different government programs, making the account’s official, as it was tagged “Projects Account”; which was even consented and appended by the office of the Accountant General of the Federation an official letter.

“Furthermore, on the issue of the right of way which is the legal right, established by usage or grant, to pass along a specific route through grounds or property belonging to another, and contrary to the media publication, appropriation before us for every recovery of the right of ways nationwide is N2.3 billion and N700 million in cash.

“This is to means that there was no extra-budgetary expenditure as claimed by the mediums.

The statement also read that the funds were transferred electronically to the beneficiaries in line with the e-payment guidelines and extant rules, noting that the project account was merely used because the payment platform does not recognize these beneficiaries.

“A project accountant does not need to be at different locations at the same time to transfer funds to approved beneficiaries or the committee members that go to the locations,” it added.

Friday Obande - December 3, 2020 0
INSTITUTE for Peace and Conflict Resolutions, IPCR, said that the continued terrorist attack on farmers in the Northeast and Northwest will trigger a food...