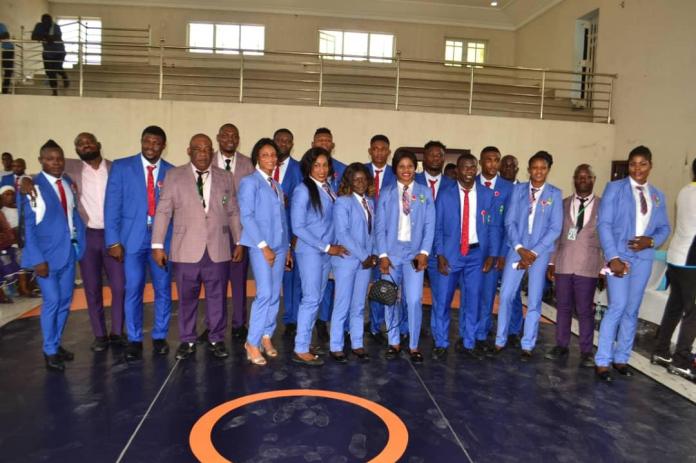 Facebook
Twitter
Pinterest
WhatsApp
Team Nigeria will no longer participate at the 2020 edition of the World Championships earlier scheduled to take place in Belgrade, Serbia from 12 – 20 December, following cancellation of the tournament by the global governing body – the United World Wrestling (UWW).
The Nigerian contingent made up of Commonwealth champions Odunayo Adekuoroye (57kg), Blessing Oborududu (68kg) and Aminat Adeniyi (62kg), under the tutelage of head coach Purity Akuh, had begun intense preparations for the World Championships before the latest development.
The UWW said in a statement that the ‘criteria defined’ for the tournament to hold had not been achieved, adding that “with many nations reinstating travel restrictions in response to COVID-19, the participation hurdles were not met”.
A substitute event, the ‘Individual World Cup’, is expected to take place in Belgrade instead, with confirmation of dates for the new competition to be announced in the coming days, UWW informed. However, Team Nigeria won’t participate at the ‘Individual World Cup’.
Following the cancellation of the World championships, the trio of Adekuoroye, Oborududu and Adeniyi as well as other wrestlers in the country, will now shift their attention to the proposed Edo 2020 National Sports Festival in Benin City next month, where they will get their first competition in 10 months.
Their last event was in Algiers at the African Championships, where Nigeria dominated Women’s Wrestling, claiming 6 gold and 4 silver medals to emerge the Best Female Team of the Tournament for a record nine times.
xxxxxxxxxxxxxxxxxxxxxxxxxxxx
Chima Moneke: D’Tigers new boy shed tears over maiden call up
D’Tigers new invitee, Chima Moneke still can’t quite believe he is on the verge playing for Nigeria and revealed he shed tears after being named in the 2021 FIBA Afrobasket 20 man provisional list.
Moneke in an interview with NBBF media, Moneke revealed he was overcome with emotion when the Nigeria Basketball Federation first reached out to him about playing for D’Tigers and the tears came pouring when he received his maiden call up.
“It was a very emotional moment. I cried when I got the call,” the Power Forward who plays for Orléans Loiret Basket in France said.
“I called all of my friends, the people that I love, the people who care about me and they were very proud of me and most importantly my parents.
“They cried, I cried. I knew they would get emotion because representing my country is probably more important to them than being in the NBA if I ever get the chance to do that.”
He confessed that despite putting in the works, he never expected the invitation which made it more amazing.
“It was an amazing moment and I wasn’t expecting it and it made it sweeter.”
Speaking on how easy or difficult it will be to fit into the national team setup, Moneke assured that with his deep knowledge about the team as a fan, fitting in will not be difficult.
“I have plenty of knowledge about the team. I am Nigeria through and through. I was born there and raised. Both of my parents are Nigerians and all my brothers are Nigerians.
“Growing up, it was the Super Eagles but now, it is D’Tigers. I am familiar with almost all of the players. I have been watching every competition Nigeria has been in since I became serious about basketball.
“I follow the players and I know a few of them personally but I am familiar with most of their games because I am just a big basketball fan in general.”
D’Tigers are grouped alongside hosts Rwanda, Mali and Algeria which recently withdrew from the qualifiers taking place between 27 to 29 November in Kigali.
xxxxxxxxxxxxxxxxxxxxxxxxxxxxxxxxxxxxxxx
Flying Eagles too hot for Nasarawa United
Flying Eagles continued the preparation for the 2020 WAFU B with a hard-fought 4-2 win over Nigeria Professional Football side Nasarawa United at the FIFA Goal Project pitch in Abuja.
A brace from centre back Chris Nweze and goals from Azeez Oseni and Wisdom Ubani ensured the team took the winning to six from the same number of games.
Nasarawa United coach Bala Nkiyu used the game to test his new recruits Nanen Imenger and Austin Ayaya but it was the Flying Eagles that did the early running.
Chris Nweze gave the Flying Eagles the lead in the 3rd minute when he headed home from a Mike Zaruma corner kick.
Nasawara responded and duly got on level terms after some beautiful work in midfield that set up Abdullahi Aliyu to hit a fierce shot past Kolawale Ridwan in the Flying Eagles post in the 17th minute.
Azeez Oseni restored the Flying Eagles lead with a beautiful shot but the lead lasted only ten minutes as Silas Nwankwo profited from some slack defending to equalise for Nasarawa.
Chris Nweze got his brace from the spot in the 30th minute after the electric Wisdom Ubani was upended in the box. Ubani capped a wonderful performance with Flying Eagles fourth on the night in the 56th minute as the Flying Eagles remain unbeaten in six test games so far.

Afolabi Johnson - November 26, 2020 0
FEDERAL government has been called upon to prioritize the welfare of almajiris in the country. The call was made by the Centre for Human Rights...