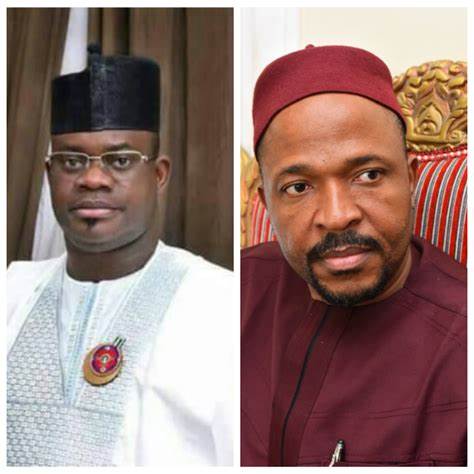 Governor of Kogi State, Yahaya Bello, and Chukwuemeka Nwajiuba, Minister of State for Education are marked early birds to obtain the All Progressives’ Congress, (APC) expression of interest and nomination forms, worth N100 million to vie for the presidential ticket of the party.

A group, Coalition of Young Political Groups under the banner; ‘Project Nigeria’ picked the forms on behalf of Nwajiuba while Governor Bello stormed the party Secretariat, Buhari House with much fun fare amidst crowd of supporters to collect the party forms.

Addressing journalists after the purchase, Governor Yahaya Bello, (GYB) said he was in the race to cling the party’s ticket and become the president to unite secure and prosper Nigeria.

Bello said he is coming to the table with the vision to restore hope to entire Nigeria, the black race, Africa as a continent and the entire black people across the world.

“That is the hope we are bringing on board; to unite, secure, and put our country and its people on the path of progress and prosperity.

“Right now what we have ahead of us is the task of canvassing and consulting all party faithful; leaders, stalwarts, members and Nigerians at home and in the diaspora,” he stated.

On the alleged scouting for emergence of former President Goodluck Jonathan as the consensus candidate of the party, Bello said: “APC is a party that has its own ethics, rules and regulations and I know surely that all of these are in my favour and I am not in anyway, scared of the pedigree of anyone whatsoever.

“I am confident that I am in the majority, I have the women, youth, people living with disabilities; they are all behind me. I have leaders, I have followers and above all, I have God almighty.”

Chidi Wogu, member of the House of Representatives who led the group that purchased forms for Nwajiuba described the presidential aspirant as one of the oldest and most reliable politicians.

“The president promised that this time around anyone who is going to run for presidency must be under 60. When I saw their seriousness I decided to coordinate with one group we put together the money and we have come today to show the seriousness by being the first to purchase this form and they find him credible, they find him hardworking,

“This form is actually put together by persons from 36 States and it’s also an opportunity to make a case if at all, we are making a case for South-east presidency, we are also making a case for the president of Nigeria chosen by Nigerians not necessarily because he is from the South-East but he is young, reliable very experienced,” he said.

In the same vein, John James Akpanudodehe, immediate-past national secretary of the defunct Caretaker Extraordinary Convention Planning Committee (CECPC) of APC has purchased the expression of interest and nomination forms to contest the party’s governorship ticket in Akwa Ibom state.

Emmanuel Ukoete, leader of the delegation that picked the forms for the former APC chieftain expressed optimism that the state chapter of the party will settle all differences and wrestle power from the ruling Peoples Democratic Party (PDP) in the state, come 2023.