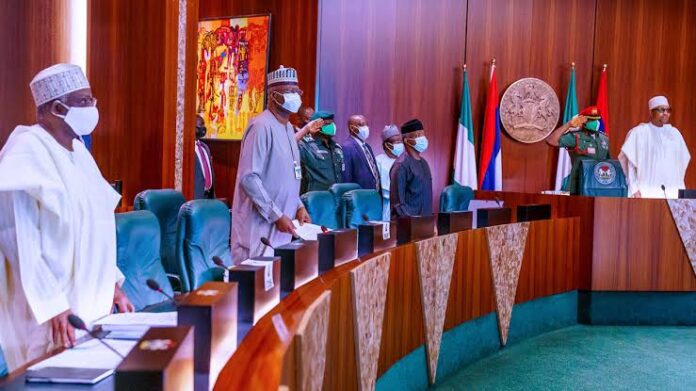 The Federal Executive Council (FEC) has approved the N30.1 billion for infrastructure development in the Federal Capital Territory (FCT) and development of facilities in Bayelsa Gas Hub.

The Minister of FCT, Mohammed Bello who presented a memo for the augmentation of road and other infrastructural projects in Wasa District of FCT, said the total sum of the project will cost N28.1.

Bello who spoke with State House Correspondents on Wednesday after the weekly Council meeting chaired by President Muhammadu Buhari at the Presidential Villa, Abuja, the the project will be completed in 42 months.

“The council approved the revised estimated total cost of the contract for the provision of engineering infrastructure to Wasa Affordable Housing District in the Federal Capital Territory, Abuja.

Also, the Minister of State for Petroleum Resources, Timipre Sylva, disclosed that the FEC approved the sum of N2.044 billion for the construction of internal road and facilities at the Gas Hub in Bayelsa state.

Fielding question on when the rehabilitation of the refineries would be completed, Sylva said, “The rehabilitation of the refineries is ongoing. As we said earlier, the old refinery in Port Harcourt, which is about 60,000 barrels per day capacity, will be functional by December and, of course, we still have some time in the contracting time to conclude the rest of the Port Harcourt Refineries. Works in the Kaduna and Warri refineries are also in progressing very well. We will soon be embarking on an inspection visit.”

The Minister of Works and Housing, Babatunde Fashola, in his comments blamed the recent traffic clog on the Lagos/Ibadan Expressway said the attitude of some drivers and the weather condition which slowed down the progress of work on the remaining six-kilometre to be completed.

“He said “I also heard that some aggrieved students, under the aegis of NANS, are also going on to the road in order to protests. My respectful view is that that is not helpful at all to the citizens. The right to protest is a very well protected right in our Constitution, but it does not include the right to inflict pain and inconvenience on other people.

Whilst their protests can go on, they should refrain from blocking the road in order to do their protest, that in itself is a violation of law, if they are well advised.”

Minister of Health, Osagie Ehanire, who also brief disclosed that the Council had approved the contract for local manufacture of COVID-19 vaccine in collaboration with Bio Vaccine Limited.

According to him, the Bio Vaccine Limited billed to commence production of vaccine at the expiration of the subsidies expected from GAVI in 2028, has 49 percent federal government investment.

Nigerians have begun training in South Africa, South Korea and India to ensure technology transfer ahead of the planned production of vaccines by the Bio Vaccine Limited, the Health Minister said.