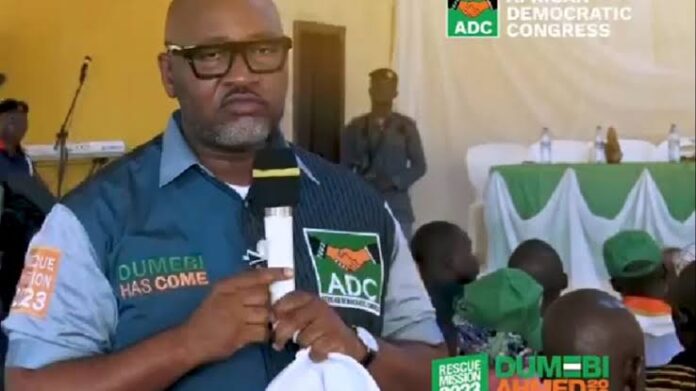 Presidential Candidate of African Democratic Congress, ADC, Dumebi Kachikwu has stressed that the Nigerian entertainment industry does not need tokenism instead it needs a government that will upscale its importance as a critical survival of the economy.

In presentation issued yesterday by the ADC Presidential campaign team, addressing the Actors Guild of Nigeria, Kachikwu said that the Actors Guild of Nigeria has come a long way since inception and still has a long way to go as it seeks to provide an enabling environment for the Guild to thrive in a country that has no real support structures for an industry that has made this nation proud.

He noted that the latest statistics from the National Bureau of Statistics, NBS, showed that over 100m Nigerians were poor saying that, “for how long can we continue like this? Our nation is at war on multiple fronts while our leaders stumble, fall and make
incoherent statements. Farmers all over the world are some of the richest people. Farmers in Nigeria are the poorest people.

“Nollywood doesn’t need tokenism. Nollywood needs the Nigerian Government to take it as a sector critical to the survival of the Nigerian economy. This is what I will do as President.

“I would use the combined satellite assets of Nigcomsat and our terrestrial spectrum to create a hybrid National Distribution Platform for all digital content. We already have this asset, and it is idle.

“The next step will be the provision of decoders or set u
top boxes in every tv home in Nigeria that would connect to this platform. Each
of this boxes would have a minimum of 2TB of hard disk to store a minimum of 600 standard definition or 300 high definition movies.

“These boxes will also be used as transaction devices for other digital contents.
Why should Nigerian government invest in this? Very Simple. If you control the
pipe, you can collect taxes or TV licence fees direct from source.

“Imagine a nation of thirty million decoders and as a content producer you release movies and they are immediately available to thirty million viewers. Let’s assume that just 5% of these viewers
purchase your movies at the cost of N100 on the day of release, you would have grossed N150m.

“How much did Nigerian banks give in loans to content producers in the last one year? What of the multi-billion-naira film grant that has been promised to the Guild by successive governments? What’s the cost of producing a top-notch Netflix standard movie and how many movies can a N1b or is it N3b grant support?”

He stated that T
The Actors Guild of Nigeria has come a long way since inception and still has a long way to go as it seeks to provide an enabling environment for the Guild to thrive in a country that has no real support structures for an industry that has made this nation proud.

“There are those who will say that the industry has never had it this good when you consider entrants such as Multi-Choice, Netflix, Amazon, Iroko, etc who have changed the dynamics but today I say to you for the thousand steps taken you could have taken a million more if Nigeria was working. Hollywood sold America to the world as a superpower and country where dreams come true.

“In no particular order of importance, it is distribution, technology, funding and infrastructure. Of course, there are other challenges such as low renumeration, welfare, training, etc but they are taken
care of if the major challenges are sorted.

“In this industry everyone understands that content is king hence in this industry Practitioners go to the extra mile in honing their crafts using the best cameras and investing money into quality props and sets but today I say to you that in Nollywood, distribution is King.

“What is the point of producing content that won’t be seen by tens of millions of Nigerians because there is no structured distribution?

“Last time I checked producers were still selling their content for peanuts to those who have the stomach to deal with piracy and other issues associated with non-structured distribution. How many cinemas do we have in Nigeria compared to the viewing population?

“How does a country that boasts the third largest film industry in the world lack a content distribution platform? Why should producers
be at the mercy of foreign platforms in take it or leave it deals?

“This is wrong. How many Nigerians have access to quality and affordable broadband if we were to accept that Netflix and Amazon
Prime are the solutions to our problems? Why do we have Hollywood movies in separate channel belt from Nollywood movies on DSTV?

“How much did Nigerian banks give in loans to content producers in the last one year? What of the multi-billion-naira film grant that has been promised to the Guild by successive governments? What’s the cost of producing a top-notch Netflix standard movie and how many movies can a N1b or is it N3b grant support?

“Bollywood sold India to the world as a technology superpower.

“This is how you help Nollywood. Imagine the other possibilities of advertising, linear channels, and royalties over time. Is this possible? Yes, it is. The technology exists. I have long touted this
to the Government, but they would rather sell their spectrum to the likes of MTN and other foreign operators who take their profits outside of Nigeria than investing in a platform which has the potentials of creating a trillion-Naira movie industry.

“When you earn good money from your films you can invest in better technology, better sets, costumes, etc. When people see that there is potential in Nollywood, then foreign investments will flow in a
because they know the content produced can be sold.”

The ADC Presidential flagbearer called on practitioners to chart a new course for the country saying, “dear practitioners history beckons on us all to take our country in a different direction. We can no longer afford to have geriatrics who can’t understand our today destroy our tomorrow.
For too long we have been their victims. We must now take our
country back from them.

“The world talks about agribusiness and agripreneurship, we talk
about subsistence farming. The rest of the world is taking proactive steps to fix the twin problems of recession and inflation, our government continues to pauperise us by increasing VAT and
duties at our ports.

He said: we can overcome our problems but we must do away with these leaders and chart a new course for ourselves. No longer should we let them divide us by tribe, tongue and religion. No longer will mediocrity rule our land. We must enthrone meritocracy and
build a Nigeria that works for everyone.”