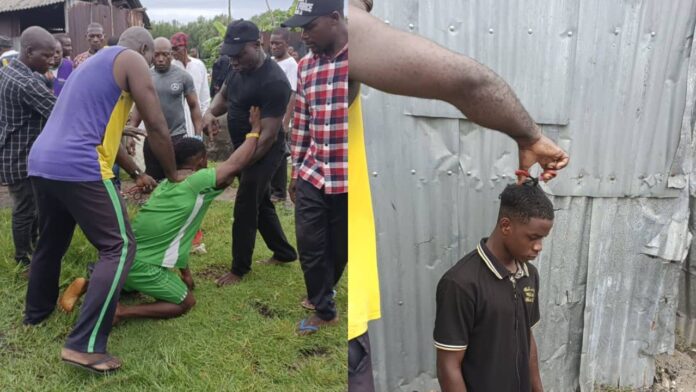 Amayanabo of Okpoama Kingdom, HRM, King Emmanuel Ebitimi Banigo, Okpoama XXI from Okpoama community in Brass Council Area of Bayelsa State, has ordered the raid of spots by drug peddlers and flogging of boys indecently dressed in the area.

The Community youths and chiefs led by the Chairman of the Chiefs Council, Chief Inikio Sam Sele-Dede, while carrying out the directive of the Monarch demolished 14 drug peddling points and illicit drugs suspected to be cannabis popularly known as India Hemp, benzos, cocaine, LSD and codeine were found and seized.

It was gathered that the decision to move against the illicit drug spots in the community was provoked by the rising use of drugs within the community with unprovoked tendencies for violence and shabbily dressing.

The raid was welcomed by jubilation amongst the community folks who joined the team to effect the demolition of the illicit drug spots.

A source within Okpoama community confirmed that scores of youths with strange haircuts and saggy trousers were apprehended and hair style shaved.

The culprits were also subjected to cutting of hair and flogging.

Speaking at the end of the exercise, Chief Inikio Sam Sele-Dede said Okpoama has forbidden drug peddling and consumption in the community, saying that anybody caught will be handed over to the law enforcement agents for prosecution.

He commended the resilience and commitment of the people of the community in checking drug peddling and consumption, and called on hard drug dealers to keep off the community.