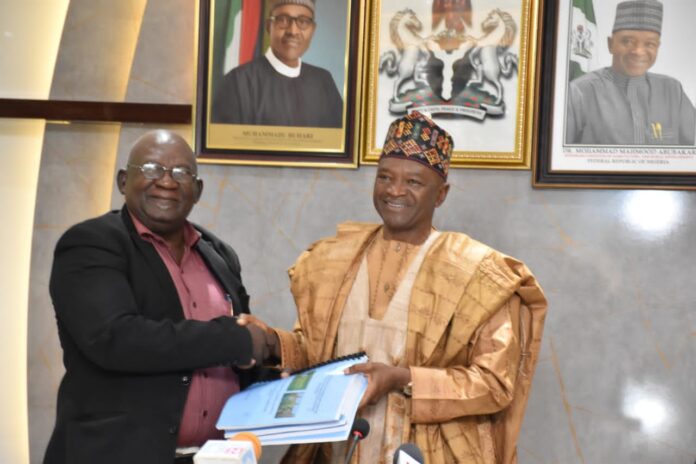 Federal Government has reiterated its commitment to streamline the existing sorghum varieties in the country to enhance Self-sufficiency, income generation, Food and Nutrition Security amongst others.

The Minister, Federal Ministry of Agriculture and Rural Development, Dr. Mohammad Mahmood Abubakar revealed this while receiving report of the Sorghum Technical Committee, in his office, in Abuja.

Abubakar stated that the objective of streamlining the existing sorghum varieties was to find other ways of improving productivity, value addition and quality of sorghum produce, noting that the exercise was crucial as it would enhance farmer’s income, attract more youth to sorghum cultivation, meet national demand as well as contribute to the growth of the Gross Domestic Product.

In his words: “This cannot be achieved without the collaborative efforts of all Stakeholders of which farmers, Seed producers, Input providers and international Institutes are part”.

He recalled that the technical committee arose from a sorghum stakeholders meeting on production, commercialization and product development of sorghum in Nigeria held in Gombe State in 2020, adding that to achieve the objective, the Ministry had set up the committee to streamline the existing varieties.

The Minister pointed out that, “recently Sorghum crop assumed great industrial relevance such that many multi-national companies such as Breweries now use Sorghum grits as adjuncts (up to 40%) to barley base (Mash) for making alcoholic and non- alcoholic beverages and breakfast cereals.”

Speaking further, he noted that flour mills also use sorghum composited with wheat for flour which serves as main ingredient in the manufacturing of confectioneries and other food products which sorghum serves as one of the ingredients.

Abubakar, however, identified the prevalence of many varieties and cultivars as the major problems leading to low Sorghum productivity resulting in the supply shortfall.

Earlier, the Permanent Secretary, Federal Ministry of Agriculture and Rural Development, Dr. Ernest Umakhihe represented by Director Rural Development, Engr. Udo Daniel commended the Committee members for the report presented, hoping that the streamlining of the existing sorghum varieties would meet food and industrial demand that would achieve the desired goal.

In his remarks, the Chairman of the Committee, Prof. Daniel Aba stated that Sorghum had been a sustainable crop in Nigeria and the rest of Africa and as such had gained commercial importance in most of the African countries because of its different uses, noting that the crop is gradually replacing other crops in Nigeria and other African countries.