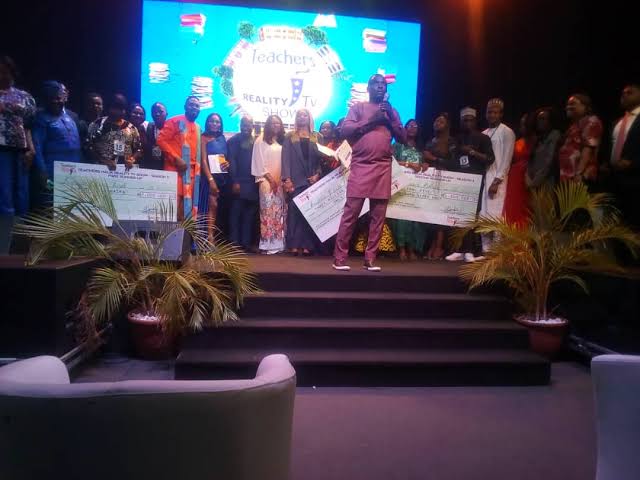 Organisers of The Teachers Naija Reality TV Show has emphasised on the need to improve the standards of livelihood of teachers in the country noting that this in turn will help build a better and we’ll informed society.

Speaking during the Season 3 Grand Finale of the Reality Show held today in Abuja, the Convener, Enuagwuna Ubaka said that the essence of the show was to change the narrative of the teaching profession.

Ubaka stated that the the reality show was targeted towards teachers, as it was aimed at improving the perception of teachers and the teaching profession also to reward teachers by putting them in the limelight.

He said, “Teachers train the future generation and they deserve to be recognised. If other shows give out a lot of money to their participants, I think teachers deserve more because they have more impact.

“The housemates who were selected randomly across the country, were prioritised based on their intellectual capabilities.”

According to him, “over the years the profession has been bastardized, the occupation has been looked down on. If you look at what is obtainable outside the country, in countries like Finland, Germany, Japan, Sweden, there teachers are regarded as first class citizens then the question is why can’t that be done in Nigeria and Africa. So we said they best way to get this done was to get partnership that will bring teachers to limelight, to highlight what the teachers do for our children, to put them on television program or shows to reward their efforts to make sure they have their rewards on earth.”

After 4 weeks of intense show from 19 Housemates, Theophilla Effiong Hanson from Cross Rivers State emerged as the winner of the Third Edition of Teachers Naija Television Reality Show.

Theophilla who was the winner of the third edition of the show themed ‘The Smart Teacher’ clinched the Grand prize of 10 Million Naira. (N3 Million cash with 7 Million worth of prizes.)

She edged out two other finalists Queen and Adenike to clinch the coveted status of winner of this year’s edition and was invested with the Distinguished Fellow of Chattered Educational Practitioners.

No fewer than 19 Nigerian teachers participated in the third edition of Teachers Naija Reality TV Show while vying for the ultimate prize of N10 Million.

The reality show, an initiative of Anub Media Limited, had its First Season in 2019 where the winner, first and second runners-up went home with N1.5m, N1m and N500,000, respectively.

In its second edition in 2021, the show’s winner was awarded a three-bedroom flat in Abuja and the sum of N2m in cash prize, while the first and second runners-up got N1.5m and N1m, respectively.