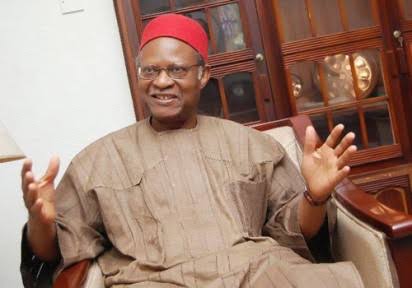 Chief Emeka Anyaoku is Ichie Adazie Obosi, he was the third Commonwealth Secretary-General. Chief Anyaoku’s
international career did not make him neglect his office as Ichie Adazie of Obosi, a traditional Ndichie chieftainship.

Chief Emeka Anyaoku was born on January 18, 1933 into a well-respected family with a long history of traditional titles, in Obosi, in Anambra
State, Nigeria. He had elementary schooling at CMS Central School, Agbor, Delta state, after which he proceeded to Merchants of Light School, Oba for his Secondary education.

In 1959, Anyoku obtained a London University Honors Degree in classics as a college scholar and joined the Commonwealth Development
Corporation (CDC) in Lagos.

The corporation sent him as an Executive Trainee to the CDC headquarters in London from where he went on a
course at the Royal Institute for Public Administration in London. In April, 1962, Emeka was offered appointment with the in the Foreign Service and within a month of his entry, he was appointed Personal
Assistant to the Permanent Secretary of the Ministry for External Affairs. There he was closely involved in the process that led to the establishment of the Organization for African Unity (OAU) in May 1963.

In the same 1963 he was posted to its Permanent Mission to the United
Nations in New York. In 1966, Emeka joined the Commonwealth Secretariat as Assistant Director of International Affairs.

It was from here, in 1966, that
Emeka Anyaoku made the big move to the Commonwealth.
He also moved up the ladder within the Commonwealth Secretariat. He became the Director of the International Affairs Division in 1971 and
in 1975 rose to the position of Assistant Secretary-General. In 1977, Commonwealth Governments elected him deputy secretary-general with responsibility for international affairs and the secretariat’s administration.

Chief Anyaoku’s achievement as secretary-General are indeed numerous and highly commendable. They include assisting member countries in
strengthening democracy, Accountable administration and the rule of law, observer missions to parliamentary and presidential elections,
and training in constitutional drafting among others. One of his most outstanding successes was his positive leadership role in securing the end of apartheid in South Africa.

In recognition of his spectacular performance Chief Emeka Anyaoku has
received honors and awards. He is a Commander of the Order of the Niger [CON], an Honorary Knight Grand Cross of the Royal Victorian
Order – a personal gift of the British Sovereign Conferred on
individuals of special distinction. Other national honors have come
from Lesotho, Cameroon, Namibia, Trinidad and Tobago and Zanzibar.

Chief Anyaoku has many honorary appointments including the recent one
by the Federal government of Nigeria as the Chairman of the
Presidential Advisory Committee on International Relations. He possesses more than 23 honorary degrees from universities all over the
Commonwealth, while the University of London established Professional Chair in Commonwealth studies named after Emeka Anyaoku.
Chief Eleazar Chukwuemeka Anyaoku retired as Secretary-General of the Commonwealth on March 31, 2000 after two full terms of exemplary and meritorious service – a worthy role model, not only for Nigeria, but for the whole of African and the entire black world.

Chief Emeka Anyaoku is happily married to Princess Bunmi Anyaoku and they have four children, Adiba; their daughter and three sons;
Oluyemisi, Obiechina, and Emenike.