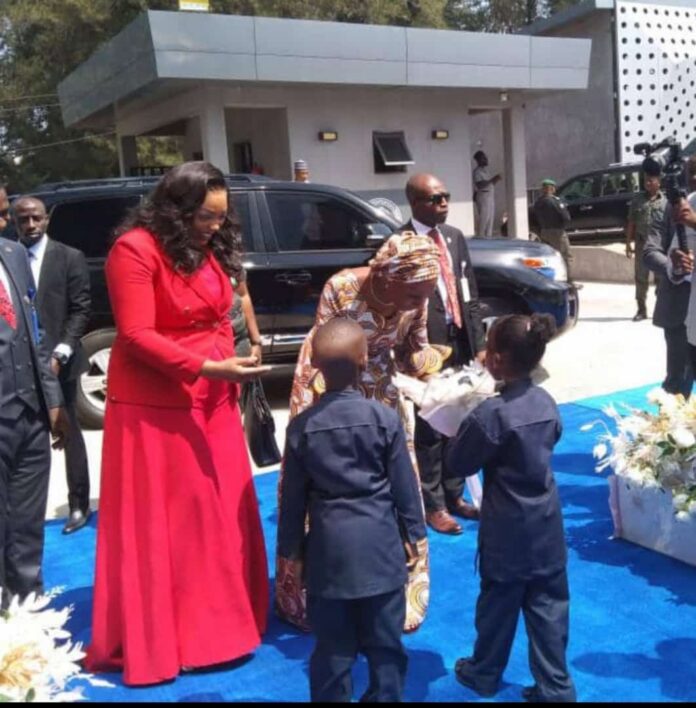 Wife of the Vice President of Nigeria, Mrs Oludolapo Osinbajo yesterday hinted that education was beyond the four conners of the classroom but a way of life that unlocks one’s potential.

Osinbajo noted that additionally, being a decent, dependable person in society was more important than simply having a degree, a master’s degree, or a doctorate.

She gave this hint when she visited The Aretean School , Area 11, Abuja to inspire scholars that they can grow up to be fulfilled in life if they don’t allow people to talk them down.

According to her: “Education is a way of life not only to the scholars but to the teachers and other staff, it teaches honour, honesty, loyalty, integrity, hardwork, godliness and kindness all those things that undergird every good virtues needed in the society.

“If only we knew that they lied to us, when they told us we couldn’t do it, I come to tell tlyou today that we will, we can. I used to go to one of the most dangerous part in Lagos some years ago to speak to the people there, the message I take to them is that they are precious, they only belibed the lies they were told in the past. They believed no one would ever love them. The message I took to them is what I brought here today, you are precious, you can and you will make it.

“Teachers should handle the scholars with honour and respect , know that in your classroom , you are the one that makes the difference until they grow to adulthood , you have the privilege to be part of their story.

“Nobody can make you lower than without your permission, refuse to give permission to those who think you can’t do it.”, she stressed.

Earlier, The President Aretean School, Mrs. Uloma Rochas Nwosu said that Africa’s solution lies in Africa, every Nigeria child should get educated here, so that the culture, norms and beliefs of Africans will be inculcated in the scholars to grow up to be leaders of tomorrow.

“The reason we were confident that the presence of the Wife of the Vice President of Nigeria will have a great impact as well. Beyond being the wife of the Vice President of the Federal Republic of Nigeria, Mrs. Oludolapo Osinbajo has been a great role model to our scholars. Hence, the desire to invite her to our prestigious school has always been at the top of our list of guests.

“In line with this, it is our tradition to continually invite national and world leaders to inspire our scholars. Amidst some popular and prominent leaders who had visited the school in the past are the former and the first female president of Liberia, Madam Sirleaf Johnson and the current governor of Cross River State, Professor Ben Ayade. Without any doubt, the impact of their visits had been felt by every scholar of our school.

“The Aretean was established in July, 2021. The vision is to be the first Ivy League school in Nigeria by producing the next generation of leaders”, she stated.