HomeMetro NewsMinistry, IOM to collaborate on ending all forms of abuse, exploitations on...
Metro News 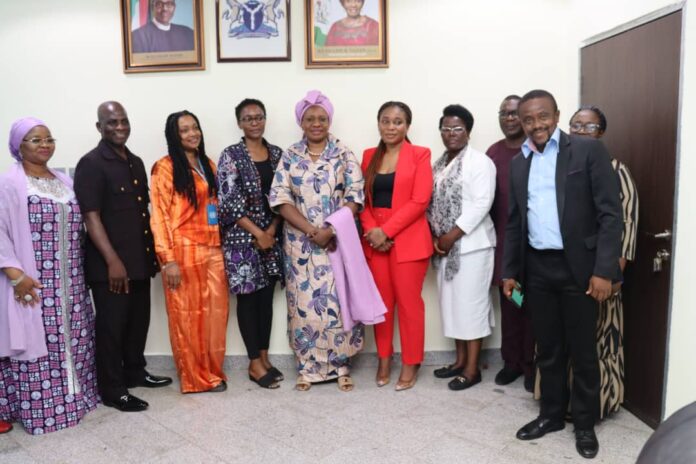 Minister of Women Affairs, Dame Pauline Tallen, has said that violations to human persons was unacceptable and that such would be addressed tenaciously while revealing the Ministry’s resolve to work with other relevant Ministries to tackle this, head-on.

This resolve was made, as cases of migrants who were exposed to all forms of abuse particularly, the boys, girls and women migrants has becoming alarming in recent times.

Tallen made this revelation while receiving the delegation from International Organization for Migration, IOM, led by Ms. Pretage Murina, the Deputy Chief of Mission who came in company of Ms. Chibalani Katonga, the Protection Officer, on a briefing visit.

She said her heart bled when she heard about migrants with disabilities, vulnerable women and children migrants who have lost their identities and who additional to their deprivations, were being subjected to all sorts of abuses and exploitations.

While recalling 2021 when the Memorandum of Understanding, MOU, which was signed between her Ministry and IOM on Thursday, 15th April, 2022, the Minister reiterated the full commitment of the Ministry to strengthening existing collaboration between the two bodies in order to address issues affecting migrant women and children:

“All my team members are fully committed to work with you and if there is anything that slows the process, quickly alert me,” she said.

The Women Minister said that the Ministry will support IOM to achieve its stated objectives and make their work easy.

Tallen further stated that she was passionately committed to the “train the trainer, TOT” and the “Shelters’ issues” raised by the IOM delegation which she said the Ministry will respond to accordingly.

The Minister further gave her assurance that she would respond to any other challenges they might face in the course of carrying out their assignments in order to give succour to the affected migrants.

The. Minister showed visible anger when she was told that over 1000 Nigerians were in transit camp in Niger and promised working with the Federal Ministry of Humanitarian Affairs, Ministry of Foreign Affairs and Federal Ministry of Interior as well as other relevant organizations to quickly alleviate their plights and also set machineries in motion to bring them back to the country.

Speaking through Mr. Idris Mohammed, the Director of Economic Services, the Permanent Secretary, Mr. Aliyu Shehu Shinkafi said he was fully apprised of the purpose of visit of the IOM; saying that a lot has been achieved since the MOU was signed in 2021.

He further said that as the meeting was to brief the Minister on the progress made so far, his initial meeting with the IOM was duly communicated to the Minister who was indisposed at the time.

The IOM’s Deputy Chief of Mission, Ms. Pretage Murina thanked the Minister for receiving her team despite her tight schedules.

She disclosed that a lot has been achieved since the signing of the MOU with the Ministry in 2021.

While spelling out the nature of relationship between the Ministry and IOM, she said they were committed to working with the Ministry on four big areas, which according to her, interfaces with what IOM does and which falls under the strategic priorities of the Ministry in terms of economic empowerment, poverty alleviation for women; gender-based violence and protection issues among migrants.

She said this brings to fore, the protection issues faced by migrants.

According to her, IOM is committing to the promotion of settlement and alternative care for the children; particularly, unaccompanied children and unaccompanied migrants travelling through Libya.

Citing IOM’s assistance which facilitated the return of more than 29,000 Nigerians stranded in Libya, she revealed that 18 per cent of this number are unaccompanied children or orphaned children without parents.

The IOM Chief solicited for the support of the Ministry in the refurbishment of shelters where those children will be settled.

While giving her technical presentation on the status of the MOU entered into with the Ministry, the Protection Officer, Ms. Chibalani Katonga, explained that within the strategic areas of the Ministry, they have been able to develop guidelines and Standard Operating Procedures, SOPs, interventions on women and children exploitation and abuse. She added that once the robust SOPs and guideline-documents are finalized, it will standardize and guide issues of women and children migrants just like it will address how to conduct best interest examination on migrants especially covering those migrants with disabilities and mental health challenges and other forms of exploitations and abuse.

The Protection Officer, Ms. Chibalani Katonga revealed further that IOM is currently refurbishing one shelter in Abuja, train staff at the facility and share knowledge to the Ministry’s staff on how to identify and provide professional assistance to migrants.

She added that a scheduled meeting comes up next week with selected Ministry’s Management Officers, including undergoing train-the-trainer, TOT, capacity building that will cascade the knowledge to other States.

Ms. Chibalani Katonga mentioned that yearly work-plan between IOM and the Ministry which captured two new additional requests in terms of project vehicle and development of National SOPs apart from the initial four mentioned above, making it six interventions areas, was being finalised.