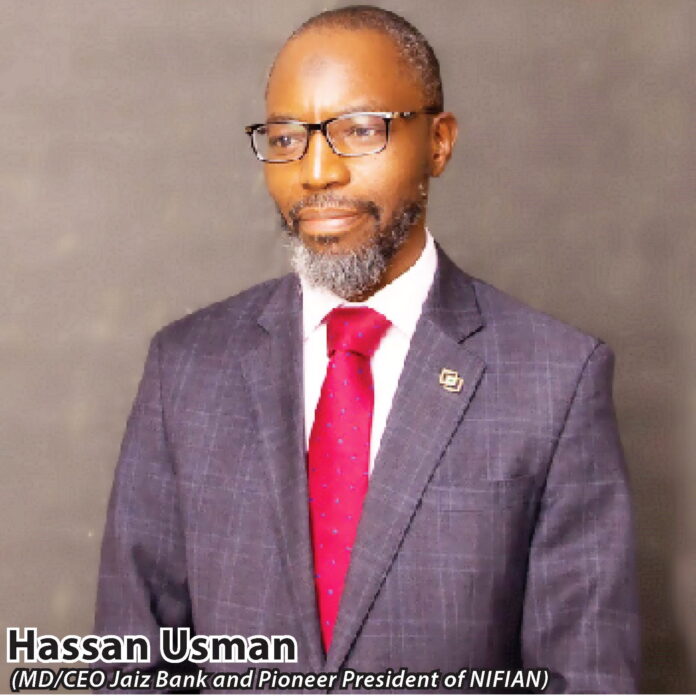 Mr. Hassan Usman graduated with a first class degree in Accounting in 1985 from Ahmadu Bello University, Zaria, Nigeria and became an Associate Member of ICAN in 1989.
He obtained a Post Graduate Diploma in Management in 1995 from the Maastricht School of Management. Mr. Hassan also attended the Oxford University Advanced Management Programme in 2002. He worked as the Financial Controller of Nigerian Development Company Limited, Kaduna until he joined NAL Merchant Bank Plc. where he served as the Financial Controller and Treasurer respectively between 1996-2001.

Mr. Hassan had a brief stint with Inland Bank where he served as General Manager, Banking Services before re-joining NAL Bank as Deputy General Manager and Head, Business and Financial Advisory Group. Mr. Usman joined Jaiz International in 2005 as a pioneer staff and was a key member of the team that led the process leading to the licensing of Jaiz Bank Plc in 2011. He served as General Manager of Business Development from January 2012 till April 2013 and was Executive Director in charge of Operations and Information Technology prior to his appointment as the Managing Director/CEO in June 2016.

In March 2021 the Non-Interest Financial Institutions Association of Nigeria (NIFIAN) elected Hassan Usman as its pioneer President. Mr Usman was inaugurated alongside other six EXCO members to steer the affairs of the umbrella body of all corporate organisations offering non-interest financial and related services in the country for a first term of two years.

The Executive Council is expected to steer the affairs of the Association towards the realisation of its objectives for the advancement of financial inclusion through noninterest finance in Nigeria.

In his inaugural address, Hassan Usman said the journey started more than a decade ago with the Nigeria Islamic Finance Working Group, a multi-institutional platform under the auspices of EfinA (Enhancing Financial Innovation and Access). Mr Usman said: “As today marks a new chapter in our pursuit, I would like to reiterate the fact that we are not there yet. This course is a journey and not a destination.

While the overarching objective remains constant, the detailed operational and strategic initiatives of the Association shall continue to evolve to meet the requirements of the day.
“To this end, I will like to pledge that over the course of my tenure, I will like to work with my colleagues in the Council to push some prominent initiative including promotion of sound Islamic banking and financial system and practice in Nigeria; growth and development of requisite market infrastructures such as an efficient non-interest inter-bank system.

“Pursuit of harmony in Shariah pronouncements (fatwas); represent the interest of members locally and internationally; provide advice and assistance to members pertinent to the development of their institution and deepen public awareness.
I look forward to working with members to make Nigeria the Islamic Finance Hub of Africa.” Hassan Usman is a Fellow of the Institute of Chartered Accountants of Nigeria (ICAN).