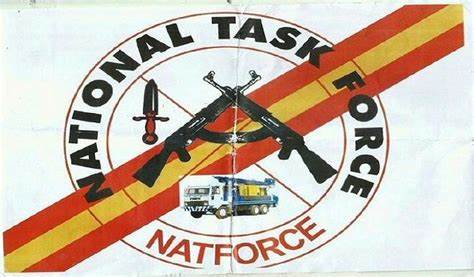 National Taskforce on Prohibition of Illegal Importation/Smuggling of Arms, Ammunition, Light Weapons and Pipeline Vandalism, NATFORCE, has distanced itself from an interview granted by one Otunba Adegbenro Adejare, saying he is not the agency’s spokesperson.

In a statement signed by its Director General, DG, Dr. Baba Mohammed, it says one Otunba Adejare Adegbenro, who recently granted interview to Sunnewsonline is not the spokesperson of the agency.

Adegbenro, who granted an interview on the state of the nation recently, spoke about the level of insecurity in the country.
Reacting to the development, NATFORCE spokesperson, made available to journalists, noted that “Adegbenro is not the spokesperson of the agency.

“He is not authorised to grant interview onbehalf of the agency.

“We acknowledge and align with the present administration”s efforts in the fight against terrorism and other forms of crimes and criminality.

“The general public is advised to ignore all that came from Adegbenro,” he noted.