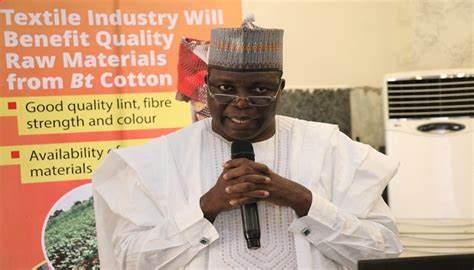 Mustapha who spoke during a press conference on the commercialisation of the new variety of cowpea, said that the food crop is revolutionalising Nigeria’s food production with its tremendous yield, quick harvest, non-shattering and good cooking characteristics.

Highlighting gains of the improved cowpea, he said it is climate-smart, reduces chemical insecticide spray by more than 60 per cent, increases farmer income by 80 per cent, preserves the environment from pollution due to insecticide spray, thereby preserving the health of local farmers from the carcinogenic effects due to excessive insecticide spray and restores livelihood of poor farmers.

“The efficacious nature of the Bt. gene against maruca vitrata in the field and on-farm has led to 100 to 500 per cent fold yield increase with no adverse effect on non-target organisms and a huge economic benefit of over N64 billion”, he said.

“The feat attained with the development and commercialisation of the PBR Cowpea has, again, proven that if determined, Africa has what it takes to solve its challenges. Remember that it is about food and nutritional security, the well-being of our farmers, improved income and less use of chemical sprays for environmental sustainability,” he added.

Speaking on the safety of the improved PBR Cowpea, the director-general, National Biosafety Management Agency (NBMA), Dr. Rufus Ebegba, assured Nigerians the crop is safe for both human consumption and the environment.

He stressed that the PBR, genetically-modified with a non-harmful substance sourced from the soil (Bacillus Thuringiensis) that resists insect attacks and infestation of the staple food, was subjected to several rigorous risks analysis and safety tests by the Federal Government before approval for public consumption.

Also, the country coordinator, Open Forum on Agricultural Biotechnology OFAB, Nigeria chapter, Dr. Rose Gidado, said Nigeria has etched her place in the comity of nations with the commercialisation of the PBR Cowpea. Nigeria’s action, she said, has caused other African nations to come learn from her success. She stressed there is no difference between the conventional cowpea and the modified one. “Apart from being resistant to insects, they share the same characteristics in taste, colour, texture etc.”