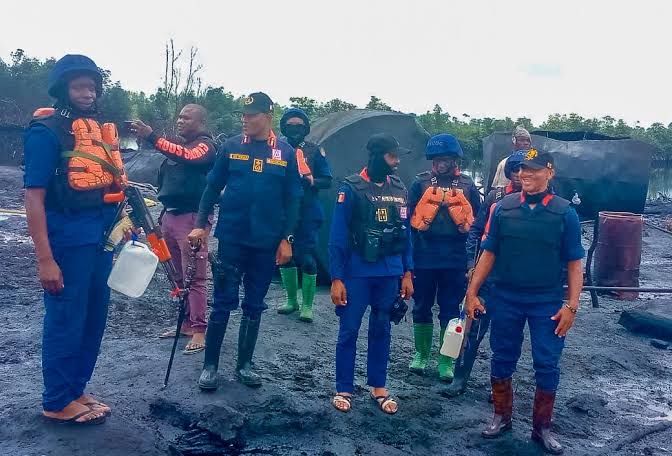 According to report made available to Nigerian Pilot, by the Agency’s Director of Public Relation, DCC Olusola Odumosu yesterday, the operation was carried out successfully following a tip off on the nefarious activities of vandals and oil thieves operating a very big camp with about five illegal refineries in the area.

He added that two suspects were nabbed during the operation while other collaborators remained at large. The intelligence report however, revealed that the site belongs to three individuals who consist of one woman and two other men currently in NSCDC custody and are volunteering information to assist in carrying out further investigation.

The Squad Commander, DCC Brah Umoru Samson, who led the operation, assured Nigerians that the SAVMU will not condone any act of sabotage to the economy and therefore warned all illegal operators to engage in legitimate business that will not contravene the law or compromise the safety of Critical National Assets and Infrastructure in the country.

He reiterated that the arrested suspects will be prosecuted according to extant law and the Squad will ensure a total manhunt for those currently on the run. According to him, the illegal refineries and other equipment used for the illicit business has been destroyed, while investigation will be carried out with due diligence to unravel the other criminals connected to the crime for possible prosecution.

This burst on these illegal refineries came on the heels of an oil explosion in an illegal refinery wedged between the boundary of Rivers and Imo state in April this year, which claimed over 100 lives and the bodies burnt beyond recognition.

Buhari describes Nigeria’s devt ‘fantastic,’ urges citizens to appreciate what they have