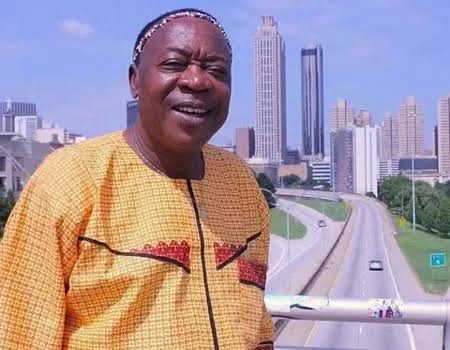 Edo State Governor, Mr. Godwin Obaseki, has mourned the passing of music maestro, Ambassador Osayomore Joseph who died in his hometown in Benin City at the age of 69.

In a statement, Obaseki described the late Joseph as an enigmatic and versatile musician.

He said, “I am deeply saddened by the news of the passing of music maestro, Ambassador Osayomore Joseph, who took the music world by storm with his talent and exported the Benin culture to the world.

“Osayomore Joseph was an enigmatic and versatile musician, who spread didactic messages with his soulful and sonorous voice.

“His contribution to the creative industry in Edo State is as remarkable as it is transformational. He was a crucial voice in the quest to make society better and more livable with his music which focused on serious issues.

“His long music career, which started in the 1970s, was very productive and enriched the lives of many. The boldness and candour enmeshed in his rhythmic melodies earned him local and international acclaim.”

“I commiserate with the Osayomore family, fans and friends of the illustrious musician and pray that God will grant all the fortitude to bear this irreparable loss.”

The Ace Highlife musician, Amb Osayomore Joseph was an indigene of Edo State, whose passing away on Saturday, June 11, 2022 was announced and confirmed in a press release issued by Comrade Willy Eghe-Nova, who is PMAN’s Administrator/Governor in Edo.

Eghe Nova said, “Sadly, PMAN on Saturday, June 11, 2022, lost a great member and music legend, Ambassador Osayomore Joseph. Until his death, he was a prolific singer and one of Edo State’s prominent sons.”

He added that the Performing Musician Association of Nigeria, Edo State chapter, expresses deep sadness over the death of the iconic musician.

Also confirming the loss of the great icon, Chairman of COSON, Chief Tony Okoroji said, “I have just learnt of the passing on of the very vibrant and effervescent music maestro with his roots in the ancient Benin kingdom, the great Osayomore Joseph.

“The late Ulele Power King as he was known by his many fans was my friend.

“May his creative soul rest in peace.”

The late singer was born on October 29, 1952, in Ugha village near Benin City, Edo State, Nigeria and was one of the early pioneers of African popular Highlife music.

His music was inspired by Sir Victor Uwaifo, Fela Anikulapo Kuti and King Sunny Ade before he branched out and began releasing his own music in 1976.

After releasing several albums from 1976 to 1979 he returned to Benin to continue his career which was picking up support amongst Edo people in Benin.

He used his musical training to combine contemporary popular music — funk, Afrobeat, and highlife with Edo’s indigenous songs and rhythms.

His return to Benin found him success between 1980 and 1985 with a series of fan favourite hits. This success came as Nigeria was transitioning into a long period of military dictatorship.

The harsh austerity measures and political unrest disrupted the social and economic lives of the people, Osayomore responded to the political environment in the early 1990s with a series of critical songs, including “Truth” and “Teacher.”

Until Babangida had invalidated the results of the democratic election of June 12, 1992, which should have brought popular politician M.K.O. Abiola to power, Osayomore had always kept his criticism primarily indirect, however he made a bold statement with his album, June 12 Is God’s Mandate. In his song called “Baba Na Wa.” In it, Osayomore calls Babangida “evil,” the “original criminal,” and the “father of all disasters.”

He had a reputation as a freedom fighter, an activist musician with a long history of criticizing local and national political corruption through his music.

Recall that the Ace musician, Ambassador Osayomore Joseph, was kidnapped on October 3, shortly after he performed at the one year coronation anniversary of the Oba of Benin, at the palace.