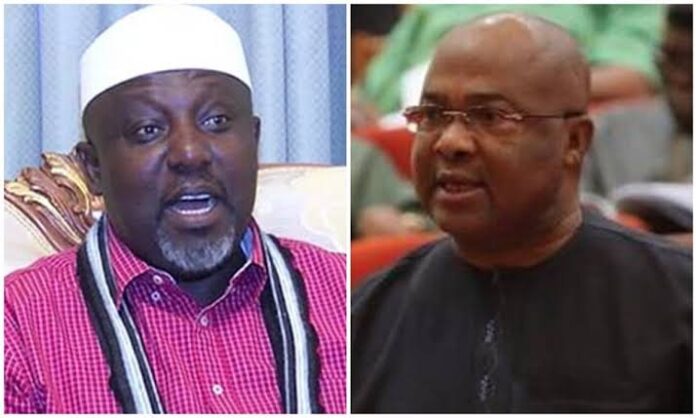 The last may not have been heard of the leadership crisis rocking the Imo State chapter of All Progressives Congress, APC, as the supreme court judgment on the matter continue to be a subject of controversy.

The Apex Court had on Friday May 27, 2022, affirmed Chief Dan Nwafor as the authentic Imo State Chairman of APC.

But that judgment had continued to be subjected to controversial interpretations by parties involved with each party giving it an interpretation suitable and favourable to it with the claim that the Supreme Court did not give any definitive pronouncement on the matter.

The two parties involved in the leadership tussle are Daniel Nwafor-led group believed to be an associate of former governor Rochas Okorocha and Mc-Donald Ebere-led executive reportedly a loyalist of incumbent governor Hope Uzodinma.

Both Uzodinma and Okorocha have been at loggerheads every since the former assumed duty as governor over what observers believe is a fight to gain control of political leadership of the State.

The legal battle for the soul of APC in Imo State started in 2018 when the party conducted ward and Local Government Congress to pick leadership for the party.

Dan Nwafor leadership however stood its ground that its four-year tenure remained valid and will expire in 2022.

Following his victory at the apex court, Chief Daniel Nwafor addressed the media declaring that his faction is the only one recognized by law and as such, all the activities carried out by the caretaker committee including especially the election of delegates for all positions in the current party primaries process are null and void.

He advice the party to immediately recognize his chairmanship and authority within his purview, lest the party risks not having any National and State Assembly members come 2023.

But governor Hope Uzodimma, in his interpretation, said the Supreme Court ruling on the Imo state APC did not affect the State Working Committee, led by Mac-Donald Ebere

The Governor declared that the ruling has nothing to do with the current State Working Committee of the party, insisting that McDonald Ebere remains the chairman of APC in Imo State.

According to a press statement issued from the Office of the Governor by the media aide to Governor Uzodimma, Oguwike Nwachuku, said: “Governor Hope Uzodimma of Imo State has dismissed any fear that may arise from the Supreme Court judgement that said Daniel Nwafor and not Chief Marcellinus Nlemigbo, was the Chairman of the All Progressives Congress in Imo state, based on the suit instituted against Nlemigbo’s leadership by Nwafor years back.”

The Governor said if anything, the law was rather on the side of the Imo APC currently under the Chairmanship of MacDonald Ebere going by the ruling, hence there should be no cause for alarm.

Governor Uzodimma urged APC faithful to go about their party activities with confident that the MacDonald Ebere leadership or tenure is standing on a firm ground and legally protected based on the Party’s rules.

He pointed out that the period under discussion has expired and the party’s National Convention has since being conducted with fresh congresses.

While the crisis lingers on, the two parties laying claim to the leadership of Imo APC bandied about two different letters recognising two people as state chairman.

One of the letters dated June 15 purportedly signed by APC national secretary, Sen Iyiola Omisore directed that the Chief Dan Nwafor led executive be reinstated as directed by the Supreme Court in a recent verdict.

Part of Omisore letter read “I write to convey the decision of the party to comply with the supreme court judgment on the case between APC vs Evans Enwerem and two others (SC/CV/884/2020) which ordered for the reinstatement of Daniel Nwafor led executives in Imo State.

“You are by this development directed to take possession of the party Secretariat and as well take charge of all party activities in the state as the Chairman until the expiration of your tenure on 31st July 2022”.

However, the South East vice chairman, Dr Arodiogbu discounted the first letter saying no such matter was discussed at the National Working Committee meeting to warrant the purported directive.

Part of his letter read “That in this instance no such notice was brought to the attention of the NWC. It is hence believed that Chief Omisore would not deliberately dare to disregard such an important provision in the constitution of our great party. And if he did, he did so of his own accord.

“The judgment so cited in the referred mischievous letter was not a conclusive judgment. Moreso, the supreme court did not give any directives for its enforcement. And you were not a party to the suit.

“Please for emphasis, once again, do disregard that letter and go on with the job as the of the Imo State APC, for our election victory”.

Checks revealed that the Mac-Donald Ebere led executive is the one currently in charge of the party secretariat even as their publicity secretary, Cajethan Duke has dared Nwafor to come to the party office to assume office.

In a statement, he maintained that “It is important to state that there was nothing in the majority judgement delivered by the Supreme Court on Friday, May 27 2022 in the case between APC vs Evans Enwerem & 2 others SC/CV/884/2020 that confers any recognition and legitimacy on Dan Nwafor and his co-travellers. The judgement remains unambiguous and clear.

But while wading into the crisis and the controversy surrounding the interpretation of the Supreme Court judgment on the matter, the national secretariat of APC insisted that Mac-Donald-led executive remains the authentic leadership of the party in Imo.

Presenting the resolution of the APC National Working Committee, NWC, after its meeting on June 30, the national publicity secretary, Barr Felix Morka, in a press statement, emphasized that the effect of the Supreme Court decision is clearly a return to status quo, as though the suit never existed.

He said consequently, the Daniel Nwafor-led Executive Committee’s tenure was effectively ended by NEC pursuant to the exercise of its authority under Article 13.3 of the Party’s Constitution.

The NPS went further to say the APC in 2021 then conducted its Ward, Local Government and State Congresses nationwide, including in Imo State, leading to the emergence of new State Executive Committees led by Mc-Donald Ebere that were duly inaugurated by the Party.

He maintained that it was on record that there was no court order or injunction restraining the conduct of Congresses in Imo State, but Daniel Nwafor refused to participate in the State Congress.

Barr Morka said: “The National Working Committee of the All Progressives Congress (APC) at its meeting held on June 30, 2022 considered the matter of the status of the Executive Committee of the Imo State Chapter of the Party and made the following findings and decisions:

“The recent judgment of the Supreme Court in All Progressives Congress (APC) vs. Evan Enwerem & Ors. (SC/CV/884/2020) has been subject of various interpretations regarding the status of the Executive Committee of the Imo State Chapter of APC.

“It has become imperative to clarify the situation in order to avoid further controversy in the matter.

“In its judgment, the Supreme Court held that the trial court lacked territorial jurisdiction and was therefore incompetent to adjudicate on the original suit in the matter.

“On page 25, of its lead judgment, the Supreme Court held that:
“Avoiding the High Court of the State in which the events occurred as done by the 1st Respondent in this Appeal, to file a suit in the High Court of the Federal Capital Territory, Abuja in which none of the events giving rise to the suit occurred, amounts to forum shopping and a gross abuse of court process.

“Consequently, the trial Court lacked the territorial jurisdictional competence to have entertained the suit in the first place, hence rendering the decision a nullity.” (Underlining for emphasis).

“Further, the Supreme Court held at page 27 of its judgement that:
“In the final analysis, I find no merit in this appeal. Same is hereby dismissed. The suit together with the processes filed right from the trial court are hereby struck out.” (Underlining for emphasis)

“The effect of the Supreme Court decision is clearly a return to status quo, as though the suit never existed.

“In 2021, the Party conducted its Ward, Local Government and State Congresses nationwide, including in Imo State, leading to the emergence of new State Executive Committees that were duly inaugurated by the Party.

“On record, there was no court order or injunction restraining the conduct of Congresses in Imo State, and Daniel Nwafor did not participate in the State Congress.

“In the light of the above, the NWC has determined that Daniel Nwafor-led Executive Committee’s tenure was effectively ended by NEC pursuant to the exercise of its authority under Article 13.3 of the Party’s Constitution as previously stated.

Recall that the likes of Senator Rochas Okorocha and Senator Ifeanyi Ararume and their supporters had alleged that they were schemed out of the nationwide membership registration and revalidation exercise leading to the Congress by governor Hope Uzodinma.

But Gov. Uzodinma had stated that those who were complaining about the APC registration in the State were those who never came near to get registered.

It is not clear if the position of the national secretariat of APC will put seal of finality on the matter, however, it is imperative that the party effectively close its ranks in Imo and other States where disputes may throw spanner in the wheel of the party going into the 2023 general elections.