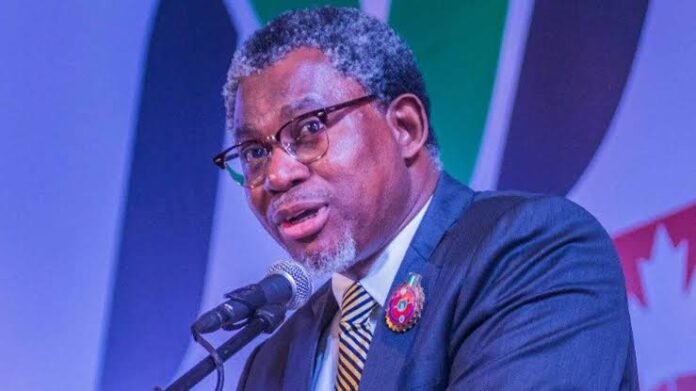 In efforts to boost the nation’s economy through the mining sector, the Nigerian Society of Economic Geologist, NSEG has held its 1st international conference and exhibition in Abuja, with the theme: “Economic Diversification: The Role of the Geoscientist, Government and Private Sector”, to brainstorm on the better ways to explore the sector.

Declaring the two- day event open, the Minister of Mines and Steel Development, MMSD, Arc Olamilekan Adegbite noted that as part of its effort to reposition the Solid Minerals Sector, the Ministry in early 2016, had identified insufficient geoscientific data, geological knowledge, weak
implementation and enforcement of mining law and regulations, and poorly regulated and informal artisans and small-scale mining sub-sector as critical binding constraints to the mining sector’s development.

Adegbite who was represented by the Director General, Nigeria Mining Cadastral Office, MCO, Engr Simon Obadiah Nkom stated that this had propelled the Ministry to immediately begin the process of preparing a detailed sector Roadmap aimed at advancing certain strategic objectives, which would eventually result in the: creation of a globally competitive sector capable of contributing to wealth creation;
provision of jobs and advance social and human security by focusing on using its mining assets to drive domestic industrialization; and
migration to winning in global markets through a value chained-based growth plan.

According to him, he considered the theme as strategic and timely, given the compelling
urgency to diversify the economy for the prosperity of the nation adding that the
theme seeks to define the roles of the critical stakeholders in developing
the minerals sector, key amongst which were the government, private
sector, and the professionals driving the mineral sector development
process.

He said undeniably, Nigeria’s Minerals sector offered a robust economic potential for diversification of the nation’s economy yet the country and indeed, many other African Countries have continued to suffer under
utilization of their mineral resources

This he reasoned has accounted for the slow phase of socio-economic
development in Nigeria and many African countries noting that “Our country is known
to operate a mono economy where oil accounts for almost 90% of the foreign exchange earnings. This present administration found this appalling and described the situation as unacceptable and promised to urgently find solutions to redress the challenges.

“The Federal Government through the Ministry of Mines and Steel
Development, MMSD, over, which I preside as the Honourable Minister
plays the role of administrator and regulator of the mining industry
activities. Some of the key reform programmes include amongst others the
others the following: Formulation of a robust Policy/Legal/Regulatory/ Institutional frameworks and a Roadmap for the development, growth and good
governance of the mineral sector development activities in line with global best practices.

“Facilitating the development of seven (7) Strategic Minerals including Gold, Barite, Coal, Lead/Zinc, Iron ore, Bitumen and Limestone as a matter of priority; generating geoscience data through the National Integrated Mineral
Exploration Project, NIMEP, for subsequent concession to
prospective genuine investors. This is the first exploration project funded directly by the Federal Government in the history of Nigeria; upgrading of the mineral title administration and management system of MCO to standard online application processes.
Concessioning of the delineated Bitumen blocks to prospective
investors through transparent competitive bidding process, which is ongoing.

The minister asserted that the private sector on its part plays the role of owner and operator
of commercial mining entities and businesses saying that this shows the high premium, which government places on the private sector in driving
economic development activities.

“The geoscientist plays such an invaluable role, which cannot be
overstated in driving mineral exploration activities leading to discoveries of minerals and preparation of definitive feasibility reports on the viability of mineral reserves. The works of the geoscientists produce the treasured
mineral raw materials that form the backbone of modern-day industrial revolution

He also called on all geoscientists and
stakeholders to support Government’s policy and efforts in diversifying the
nation economy using the mineral sector as one of the key drivers stating that “the
outcome of such efforts will benefit all of us and the generation of Nigerians yet unborn,” he added.

He reassured them of government’s commitment in continuous support towards the growth and development of the minerals sector by generating geoscience data to de-risk and make it more attractive to genuine investors maintaining that “Government will also continue to support Research and Development, R & D, endeavours tailored towards addressing real time mineral sector development challenges.”

Earlier, delivering his Welcome Address Director General, Nigerian Geological Survey Agency, NGSA, who also doubles as the President of the Nigerian Society of Economic Geologists, NSEG, Dr. Abdulrazaq Abubakar Garba, emphasized that the strategic objectives, professional targets and timelines set as enshrined in the constitution of the society needed to be pursued and met.

Garba noted that the essenc of the conference was to discuss and brainstorm on the emerging challenges arising from the dynamic operating environment of its profession especially in the face of the new normal occasioned by the much-talked-about need to diversify the Nigerian economy away from its sole dependence on crude oil by focusing more on other areas including the solid mineral and agricultural sectors to boost the wealth of the Nation.

“Economic geology can succinctly be defined as a subdiscipline of the geosciences that focuses on earth materials that can be used for economic or industrial development purposes. Often, much of the purpose of study is to identify new ore deposits for excavation as well as understanding how ore deposits are generated and localized within the Earth’s crust.

“The theme of this year’s conference, was chosen to underscore our role in the diversification agenda of the Federal Government. Economic geologists play vital roles across the entire mineral value chain from exploration to mining; and even during the post-mining phase as the issues of environment and land reclamation for sustainable use are addressed. Additionally, economic geologists also have to interface with interested stakeholders in obtaining social and mining permit licenses to operate while at the same time provide investors with the prerequisites to raise capital for mineral exploration and mining. Economic geologists therefore provide veritable and robust linkages in the entire mineral development, utilization and environmental preservation chain and are therefore key to the Federal Government’s economy diversification programme targeted at job and wealth creation.

“Let me emphasis that, investment in the minerals and mining sector by stakeholders is a patriotic duty of every citizen who believe in the Nigerian Project. In this respect, the role of governments, both at the national and sub-national levels, is to coordinate and ensure a responsible development of the country’s natural resources. To this effect, necessary laws and regulations have been put in place by government, setting clear requirements that must be met by the industry operators. The economic diversification policy of government, which is anchored on shared and sustainable mining prosperity, emphasizes the need for cooperation of governments to unlock the full potentials of the minerals and metal sector. The Federal government is developing a well governed mining sector with sustainable capacity and has also articulated a roadmap to address some of the identified challenges in the mining sector. The initiatives and strategies outlined in the roadmap are designed largely to make the mining and minerals sector an irresistible destination for global capital.

He maintained that the success of the Ministry’s National Integrated Mineral Exploration Programme, NIMEP executed through the Nigerian Geological Survey Agency, NGSA and other collaborating Agencies was mainly attributable to the role played by geoscientists from its conceptualization, design and execution.

“The recent approval by the Federal Executive Council of a Scale of Fees for professionals in geosciences and mining is a testimony of government’s resolve to stimulate the sector and ensure commensurate benefits to the professionals who are indeed the ‘brain’ and think tank of the sector.

“Undoubtedly, the nation is witnessing a re-awakening in this sector, and the Government is not resting on its oars to grab the bull by the horn. Happily, the organized private sector such as the likes of Thor Exploration (Segilola Gold), Iron Ore/Aurelia, AG Vision, etc are now taking up the gauntlet,” he explained.

He added that the economic geologist is unique with skills cutting across many of the specialists listed above.

Also the President of Nigeria Mining Geological Scientist, NMGS, Surv. Charles Alabo said that a lot has been done in providing the necessary framework and conducive environment for mining to play a pivotal role in this regard.

Alabo also said that although Nigeria was committed to a system of free enterprise, Government should continue to play vital roles in the mining industry apart from its traditional regulatory functions.

“The federal government also supplies some vital information necessary to stimulate and encourage investment for the optimum utilization of the huge mineral wealth of our country.

“The Nigerian Constitution gives the Federal Government control of all-natural resources, meaning that there is no private ownership of solid minerals in Nigeria. Though mining is within the purview of the Federal Government, sub national govemments can contribute to the growth and effective functioning of the mining sector by partnering with the federal government to ensure sustained economic growth, environmental protection, occupational safety and provision of infrastructure in host mining communities. In addition, developmental plans should take into cognizance the overall development aspirations of the State alongside the prospects and challenges of mining activities

“The Mining sector to significantly contribute to Nigeria’s economy cannot be over-emphasized. The Roadmap for the Growth & Development of the Nigerian Mining Industry highlights the potential for a progressive increase in the sector’s contribution to GDP over the next decades. It is envisaged that this shift would translate to increased public and private sector investment, more employment creation for the citizenry and overall growth and financial stability for the economy International investor interest in the sector will continue to improve with the federal government also recognizing the sector as a potential prime income generator away from oil. However, so much more still needs to be done to tap the full potentials of the mining sector given the large mineral resources of the Nation,” he continued.

He further stated that the NMGS will continue to support NSEG and indeed all the other Specialist Groups of the NMGS as they play their roles as drivers of the technical think tank of the society adding that “We shall continue to empower them to drive geosciences and mining innovations under the umbrella of our great Society. Key programs of relevance to the sector must be critically and more robustly assessed by qualified professionals in the mix of our national development. Economic geologists particularly have an obligation to future generations in providing safe and sustainable mineral exploration, exploitation and utilization programs while also ensuring minimal environmental impact. As professionals, we must therefore aim at providing sustainable geosciences and mining information for investors and policy makers including national representatives, federal and state agencies, industry, academia, and other stakeholders in the sector. Professionals in geosciences and mining should be poised to expand their roles and lead in finding sustainable solutions for modern socio-economic challenges through mineral resources development and innovative efforts.

“The need for full integration of mining into national, regional, and continental development frameworks cannot be over emphasized as such integration would bring about accelerated development to national and sub national economies to ensure maximum benefits for our people.”