Be factual in your reportage, Gbajabimila charges journalists 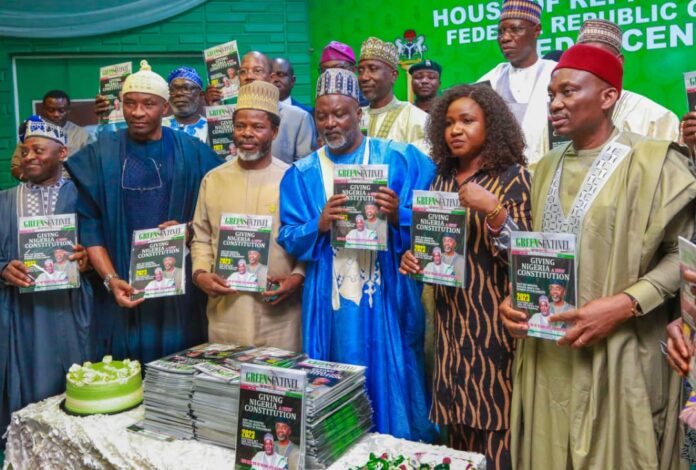 Soeaker of the House of Representatives, Hon. Femi Gbajabiamila, has urged journalists to always ensure they get their facts right before going public.

Gbajabiamila said this at the inauguration of the new Executives of House of Representatives Press Corps and the launch of its maiden magazine “Green Sentinel” as well as its website on Wednesday.

The Speaker, who was represented by the Deputy Speaker, Rep Ahmed Wase, said the House was always ready to provide any information that is required by journalists.

“I urge you to use available opportunities of cross checking your facts. Our doors are always wide open. Nothing is done is secrect because we believe in communication. Communication is power. Where you lack communication there would be gaps,” he said.

He assured the Press Corps cooperation in the discharge of its duties.

“We believe you have the capacity to discharge your onerous functions. You have a role to improve the society and you have been doing that but you should do more. Nigeria should move forward and we shall collectively move the Nigeria project forward. Democracy is about teamwork and we must work together to protect those things that would promote the tenets of democracy and good governance on Nigeria. We must all work together for Nigeria to work,” he said.

While congratulating the Corps on the inauguration and launch of the magazine , he prayed God to help the leadership in the discharge of its functions.

Chairperson of the Press Corps, Comrade Grace Ike, thanked the leadership of the House for their assistance and cooperation with the Corps, saying they have been part of its achievements.

She described the occasion as “another milestone in our drive as parliamentary reporters to be responsive, responsible, engaging and keeping time for posterity.”

She said it was the first time in the history of the House of Representatives Press Corps and indeed the Press Corps in National Assembly, a female was being sworn in back-to-back as chairman.

This, she said, is confirmation that the Press Corps is gender-sensitive.

She expressed gratitude to everyone who made the publication of the magazine possible.

“Being here today is a testament to the can-do spirit in which the leadership of the House as exemplified by the Rt. Hon. Femi Gbajabiamila as Speaker has inculcated in us all for more than three years.

“Our decision to embark on this publication is premised on the realisation that as a select few opportune to experience first hand the work of the peoples’ representatives to make good and enduring laws for our country as well as being sources of empowerment, it is important for us to document these and behind-the-scenes moments. Though we are journalists, we are historians as we document most that happen for generation to come” she said.

He said the press corps was independent as the House does not interfere in its activities.

Chairman of the Federal Capital Territory (FCT), Chapter of the Nigeria Union of Journalists (NUJ), Comrade Emmanuel Ogbeche, urged the Corps that their allegiance was to Nigerians.

He called for balance reportage and urged that democracy must always be promoted.

He urged the journalists to always ensure they are on the side of truth and accountability.