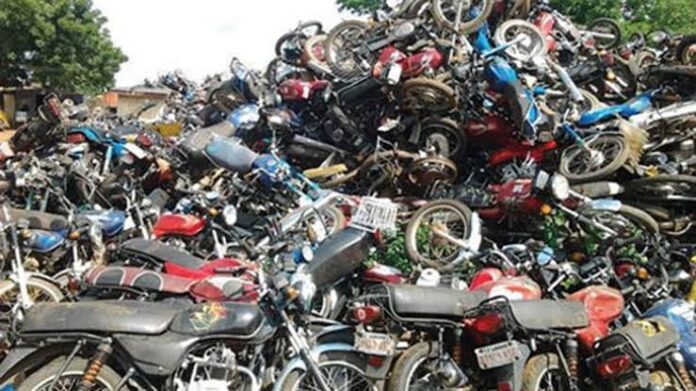 *That negligence on intelligence made Kuje prison attack possible

In a step to impede the terrorist’s activities in the country, the Federal Government has disclosed that it would place a ban on commercial motorcycles and mining activities across the federation.

The National Security Council presided over by President Muhammadu Buhari on Thursday, deliberated on the issues and said such action would eliminate sources of funds by the terrorists and bandits in Nigeria.

The Attorney General of the Federation and Minister of Justice, Abubakar Malami, alongside his Interior and Police Affairs counterparts, Rauf Aregbesola and Mohammed Dingyadi said it focused on the logistics used by the terrorists while briefing State House Correspondents after the meeting at the Presidential Villa, Abuja,

These logistics, Malami said, include motorcycles used for movement and mining which provides them with the money to fund their arms supply.

“The federal government is now looking at ways to inhibit their actions by blocking the sources already identified,” he said.

The minister explained that: “The issues deliberated bothers on the logistics being used by the terrorists, boko haram and bandits among others in the act of executing their unfortunate act of terrorism and terrorising the country.

“It was extensively deliberated upon as to what needs to be done for the purpose of ensuring that their means of logistics are indeed adequately considered and necessary steps are taken in degrading their capacity to move around. So, discussions were carried out, deliberations made and sizable resolutions in that direction were equally developed.

“The government would look into that possibility with particular regard to restriction on the use and distribution of motorcycles which is the most conventional logistical means being deployed by terrorists.

“Again, issues of funding of the terrorism and the terrorism act were discussed and deliberated upon and considered. As you rightly know, recently the government under the leadership of President Buhari had indeed, passed, assented to certain bills inclusive of the money laundering, prevention and prohibition Act among others.

“With the passage of that law, and assented to, the conventional means of terrorists funding and financing was substantially and drastically addressed and that led to forensic analysis of and identification of certain personalities that were in one way or the other connected with terrorism funding and financing.

“But then, new innovations were brought into it, into the terrorists funding and financing inclusive of the use of mineral resources- the mining for example among others. And indeed, ransom which conventionally has been taken by the terrorists and then the need arises to now look into those frontiers that are being considered by the terrorists for the purpose of addressing them accordingly.

“A resolution was equally developed on the need to address frontally, attack and ensure at the end of the day that other considerations be put in place by terrorists in terms of funding their activities are equally addressed.

“The government is looking at what measures to take in terms of addressing, bridging and blocking associated sources of funding including payment for ransom and indeed, the mining activities and the possibility or otherwise of suspending for the time being, mining activities, are being considered as well, by the government.

“Again other than logistics and funding, mining, other considerations were equally put in place on table for consideration by council with particular regard to the unfortunate incident of the correctional service attack and equally, there were anticipated resolutions arising from the consequences associated with dereliction of duty.

Malami noted that terrorists have moved from the conventional ways of funding their activities to mining and ransom taking, making it necessary for the government to act.

Meanwhile, the Minister of Interior affirmed that substantial efforts went into the gathering of intelligence before the recent attack on Kuje Correctional Center but regretted that there was an absence of will to act on it.

Aregbesola, who said the preliminary investigation on the attack had been submitted to the President, assured that all those who are found to have shirked their responsibilities would be punished.