WHAT IS GOVERNOR ORTOM’S OFFENCE? 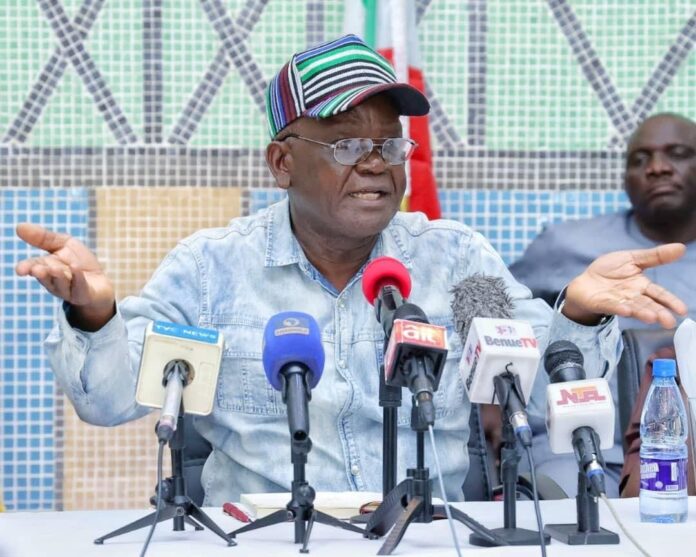 Impunity and injustice reign supreme in Nigeria, and there are countless victims, some of who are targeted for vilification because they are lovers of truth and justice. One of the victims of injustice in this country is Governor Samuel Ortom of Benue State. Ortom has been consistently but unjustifiably persecuted, victimized and subjected to all manner of travails, just because of his firm and uncompromising stand on the nation’s undesirable state of affairs which genuinely should bother every patriotic Nigerian.

As a citizen who has closely followed the Federal Government’s unjust antagonistic posture towards the Benue State Governor, I feel deeply concerned to ask, what is Governor Samuel Ortom’s offence? When has it become a crime under our laws to speak and take compelling actions in defence of the people one is governing?

Ortom is the voice of millions of voiceless Nigerians who are disillusioned with the status quo. When he speaks or acts on issues, why is the Federal Government often quick to resort to viciously denigrating his person and office rather than addressing the issues for the good of all citizens? Why does the Buhari government relish going after the messenger and not the message?

The recent statement issued by Presidential spokesman, Garba Shehu which left the core issue Governor Ortom had raised and descended on his person with shameful vitriol was about the poorest response any government would ever give to its citizens on a very sensitive issue like security. The presidency could not say in even one sentence if it had investigated Governor Ortom’s ‘allegation’ (that top military officials told him they have been warned never to attack Fulani herders) and found it to be false.

Garba Shehu made scathing and uncouth remarks about Governor Ortom calling him a “liar” and “opportunistic” politician. Nigerians are concerned that instead of proving how wrong the Governor was, the Presidency viciously attacked the personality and office of Governor Ortom when in actual sense, it is glaring that the Federal Government up to this moment, has not arrested or prosecuted anyone of the dreaded herdsmen, despite the fact that Miyetti Allah have gone to the national media openly justifying the killings of thousands of people, destruction of property worth billions of Naira and displacement of millions of hapless people in Benue state

If Ortom, as a serving Governor, cannot freely ventilate his views on issues bordering on our national security and social cohesion, who else will the Federal Government ever entertain on such issues? Is this how despotic and authoritarian the country has become? These fundamental questions are a source of worry. As a concerned Nigerian, again I ask, what is Ortom’s offence? Is it a crime to choose to stand with one’s people in the face of brazen injustice, oppression and crass impunity? Since 2017, Governor Ortom has come under a heavy wave of sponsored blackmail and victimization from the Federal Government and its willing cohorts, one of which is the Miyetti Allah Kautal Hore, the umbrella socio-cultural body of the Fulani herdsmen.

I visited Benue State before the 2019 elections and I spoke to the people of the state and discovered that they genuinely and willingly decided to stand solidly behind Governor Ortom in whom they saw a man who had put his second term bid on the line to defend them. That Ortom successfully won his re-election in the face of opposing forces at home and the infamous “federal might” from Abuja was no surprise to some of us because his people were massively behind him.

Since that time, false propaganda has been sponsored against the Governor. This is happening because he has upheld his belief that the Open Grazing Prohibition and Ranches Establishment Law in the state is the answer now and in future towards ending the genocide visited by terrorists herdsmen on innocent Benue people. No one has been able to challenge him on this or proffer a superior alternative.

On May 21, 2019, the Buhari Media Organization (BMO), in a statement, alleged among others that “Governor Ortom overtly created tension in his state and created division among the peace-loving people of Benue state.” The group heaped unprintable insults on the Governor. As if that was not enough, on June 26, 2019, Governor Ortom came under heavy blackmail and media attacks sponsored by the Presidency for rejecting Ruga settlements, cattle colonies and other plans to take over Benue people’s ancestral lands and give to herders. In what was rather a fake remorse for their horrendous atrocities committed against Benue people, the Fulani socio-cultural organisation, Miyetti Allah Kautal Hore on October 20, 2019 apologised to Governor Ortom over herdsmen attacks. National Secretary of the association, Saleh Alhassan gave the apology at a wedding in Makurdi, the State capital.

An assasination attempt was made on Governor Ortom on March 20, 2021 while the Governor was on the way from his farm along Gboko-Makurdi road. It was most shocking that on March 21, 2021, a group known as Fulani Nationality Movement (FUNAM) claimed responsibility for the attempted assassination of the Governor. The group said it carried out the attack “to protect Fulani interest”. FUNAM vowed to keep a close eye on the Governor till they achieve their target. The statement signed by Umar Amir Shehu read in parts: “Our courageous fighters carried out this historic attack to send a great message to Ortom and his collaborators. Wherever you are, once you are against Fulani long term interest, we shall get you down. This is a clear warning. We hope those who take us for granted will get the indisputable message. Our intention is unequivocal: TO KILL HIM. That mission will one day be fulfilled and very soon too.”

Also, on May 16, 2021, the Kaduna State Governor, Nasir El-Rufai attacked Governor Ortom, accusing him of blaming President Muhammadu Buhari over the insecurity in the country. And on June 10, 2021 President Buhari, while featuring on Arise News programme, took a swipe at Governor Ortom over the herdsmen crisis. The President insisted on reopening grazing reserves in Benue State and other parts of the country.

Not done with their onslaught against Governor Ortom, the Buhari Media Organisation (BMO) on August 26, 2021, yet again descended on Ortom in a media attack that smacked of pure hatred and victimization. In a statement signed by its Chairman Niyi Akinsiju and Secretary, Cassidy Madueke, BMO said Governor Ortom’s reaction to the President’s move to restore over 300 grazing reserves in 25 states including Benue would not deter the Buhari administration from executing the plan.

In what appeared as collaboration with insiders, the Minister of Special Duties and Intergovernmental Affairs, Senator George Akume, at a press conference in Abuja, on August 30, 2021 outrightly called for a state of emergency to be declared in Benue State, so as to remove Governor Ortom from office. That desperate move was reminiscent of the earlier 2018 impeachment attempt the Federal Government used Akume and others to prosecute but failed woefully.

Determined to continue seeking justice, Governor Ortom on January 24, 2022 raised alarm when he appeared on Arise television, saying that he had been blocked from seeing President Buhari. The Governor complained about the poor security situation in his state and blamed it wholly on the Federal Government’s reluctance to fight terrorists frontally. He also criticized the Federal Government for refusing to assist the state to address the humanitarian crisis which has resulted in the continuous stay of his people in the Internally displaced persons (IDP) camps. In a swift reaction, the Presidency, through the Senior Special Assistant to the President on Media, Garba Shehu, attacked Governor Ortom over his comments on television, particularly the Governor’s statement that Nigerians are regretting voting for President Buhari.

Recently, Governor Ortom in genuine response to his people through the State House of Assembly, established the Benue State Community Volunteer Guards, BSCVG as a home-grown security initiative to complement the conventional security agencies especially at the grassroots in curbing security breaches. However, in their usual trademark of antagonization and vilification of Ortom’s security initiatives, the Miyetti Allah Kautal Hore National Secretary, Saleh Alhassan was quoted in an interview on Monday, August 30, 2022 saying the Miyetti Allah is “working on creating their own vigilante groups in order to protect their people from the attacks of state-owned security personnel”. He particularly cited the Benue State local security outfit as being of concern to the group. Here too, the Miyetti Allah Kautal Hore has once again exhibited itself as a lawless group that is bent on promoting anarchy in the land. Otherwise one would wonder why any law abiding organisation would bother itself about a constitutional security formation put in place for the good of all citizens.

Shockingly, nearly a week after Miyetti Allah Kautal Hore made that statement, Nigerians are yet to hear any security agency invite leaders of the group for questioning. So, where is Governor Ortom wrong that the government of Muhammadu Buhari is in cahoots with Fulani bandits to take over the land called Nigeria? The Presidency cannot extricate itself from complicity as Ortom stated. They are yet to prove that they are not shielding Fulanis to deprive Nigerians of their God-given lands by the sword.

In their usual campaign of victimization and antagonization of Governor Ortom’s efforts toward ensuring peace and security of Benue people, the Miyetti Allah Kautal Hore also threatened that they would drag the Governor to the International Criminal Court of Justice in the Hague for what they claimed abuse of their rights and seizing of 25,000 cows belonging to their members. Every reasonable Nigerian finds such threats ridiculous and nauseating too. The unspeakable crimes committed by the Miyetti Allah group against Benue people are fresh in the minds of all. For the group to turn around and play the victim is a deliberate callous mischief to twist the narrative.

From the foregoing, where would one in good conscience point out what particularly is Governor Ortom’s offence? The Federal Government must stop viewing Ortom as an enemy but as someone who is genuinely interested in seeing that the country avoids plunging itself into the abyss of anarchy. Posterity will remember the roles we all played towards salvaging this country from total collapse and for Governor Samuel Ortom of Benue State, he has already earned himself a dignified spot for standing on the side of truth and justice, peace and equity for all Nigerians.