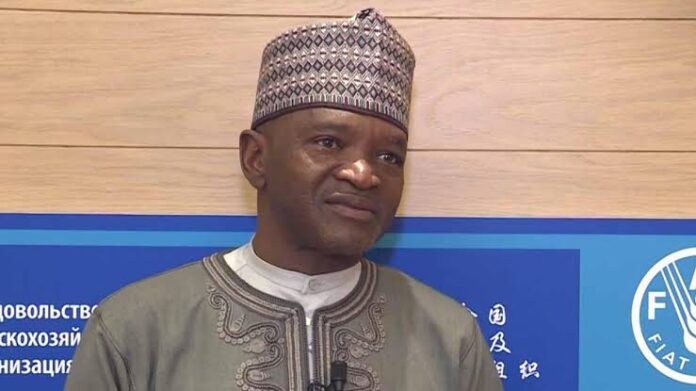 Minister of Agriculture and Rural Development, Dr. Mohammad Mahmood Abubakar stated that Agricultural sector topped the chart in a survey report of National Bureau of Statistics, noting that of seven (7) sectors identified to have contributed to the Nigeria’s economy in the second quarter of 2022, Agriculture out-performed six (6) other sectors comprising Trade, Telecommunications, Manufacturing, Oil & Gas, Real Estate as well as Finance & Insurance.

Abubakar revealed this at the opening ceremony of the 45th Regular Meeting of the National Council on Agriculture and Rural Development, NCARD, with the theme “Strengthening Agricultural Value Chain Development Process For Food Security and Economic Development” held at Rayfield- Jos, Plateau State.

He emphasized that the data reflected the impact of the implementation of programmes and projects in the agricultural sector despite the security challenges in the country.

The Minister posited that Agriculture was a key sector in the country as it was not only feeding millions of people, but also contribute towards the overall development of the economy.

In his words, “It has been consistently prioritized by successive Administrations towards ensuring food security and attaining national development plans”.

He stated that federal government has approved an intervention fund for the completion of 10 numbers of large scale rice mills in the 10 States of the federation.

He disclosed that the Ministry facilitated the production and distribution of 920MT of assorted improved seeds (Breeder, Foundation and High Breed Seeds) of Cashew, Sesame, Sorghum, Maize, Rice, as well as the distribution of 67,000Litres of Agro-Chemicals to 1,397,469 farmers and 14,785 Agricultural Equipment, Material, Tools, Groundnut Processing machines, Rice Mills, Cashew processing Machines,Oil Palm Processing Mills with components,Tractors, Combine Harvester Tricycles for Farmers, Colour Sorter and 2000 Knapsack sprayers to farmers across the country.

Speaking further, he added that recently, the Ministry was able to set up a fact finding mission under the Leadership of the Executive Director, National Root Crop Research Institute, NRCRI, Umudike to investigate the scourge of the Potato Blight Disease that has ravage some farms in Plateau State with a view to finding a solution to the problem.

Abubakar stressed on the need to maintain collaboration as a requirement for sharing initiatives, identifying interventions, pooling resources and implanting programmes in the sector.

He stated that “our task at this meeting is to review and even consolidate the previous resolutions of the Council, so as to provide further guidance on the future directions for the sector and make the desired impact on the economy as a whole”.

He, therefore, solicited for active participation and support of all stakeholders in the facilitation of rural infrastructure, research and innovation, credit and insurance, extension services and agribusiness investment in the country, emphasizing that it would enable food and nutrition security and economic development in Nigeria.

In his remarks, the Executive Governor of Plateau State/ Chairman Northern Governors Forum, Rt Hon. Simon Lalong, while declaring the Council open, commended the Hon. Minister and his team for ensuring that the Council meeting was held in Plateau State.

He said that there was no better time than now for stakeholders to convene a meeting to brainstorm on best strategies and policies to tackle hunger which is threatening the general well-being of Nigerians.

The Governor pointed out that, potato farming has been escalated from a subsistence activity to a large scale activity that was aimed at supplying the domestic market and export.

According to him, “We have completed a Tissue Culture Laboratory in Mangu as well as built processing centres and warehouses in various local governments. Similarly, we have built market stalls in various centres to make the marketing of the product very easy and cost-effective”.

The Governor seized the opportunity to draw the attention of the Minister to the increase in the incidences of devastation of Potato farms by Potato blight disease which had almost wiped out the existing low yielding and degenerated seeds.

He, therefore, requested Federal Government to come to their aid by paying some compensation for the huge losses running into billions.

He also requested for the upgrade of the National Root Crops Research Institute, Kuru outstation in Plateau State to a full-fledged Potato research Institute amongst other issues.

Earlier, the Hon. Minister of State, Federal Ministry of Agriculture and Rural Development, Mustapha Shehuri commended the Executive Governor of Plateau State, His Excellency, Governor Simon Lalong, and his team for the provision of conducive venue for the meeting and provision of necessary security arrangements for the event.

In his words, “The gesture by the Plateau State Government in hosting this meeting against all odds is indeed a demonstration of the continued cooperation between the Federal and State Governments”.

He pointed out that the intensification of effort on commodity value chain development process as reflected in the theme was out of the desire to grow agriculture, diversify the economy, ensure food security and empower the citizenry through public-private-partnership.

In his goodwill message, the Chairman Senate Committee on Agriculture, Senator Bima Mohammed Enegi, commended the Hon. Minister for his initiatives towards diversifying the nation’ s economy through NATIP which would drive the value chain.