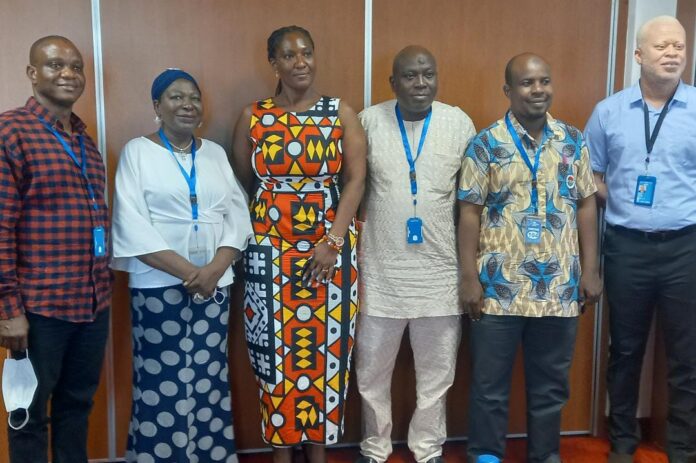 Organised labour in Nigeria has led various struggles for improved workers welfare, but issues around migrant workers were often at the back end of a long list of its agitations. However, the collaboration with the ILO has improved the capacity of labour leaders in championing improved migration governance. MICHAEL OCHE writes.

In June of 2019, the Nigeria Labour Congress (NLC) led a protest to the embassy of the United Arab Emirates (UAE) in Abuja to demand genuine reform of the controversial Khafala sponsorship system being practiced in Gulf States.

It was the first time trade unions in Nigeria will lead an open protest to demand for improved protection for the rights of migrant workers. That action was a significant turning point for NLC’s involvement in the migration governance space in Nigeria.

A year earlier, specifically in August of 2018, NLC with support from the International Labour Organisation (ILO) (had) inaugurated a National Trade Union Platform on Labour Migration in Nigeria. The platform was to ensure better and proper coordination of migration activities towards promoting safe, regular and orderly migration under the coordination of the NLC.

Although NLC has been part of the National Migration platform in Nigeria since 2005 and contributed to the formulation of the Labour Migration Policy of 2014, many trade union leaders in Nigeria knew little about labour migration and were less actively involved on how the rights of workers who migrate should be protected.

However, it was the collaboration with ILO which began in 2018 that actually changed the course for NLC involvement and gave more voice to their campaign for the protection of the rights of migrant workers.

Fast forward to 2022, labour migration has become a topical issue of struggle for organized labour in Nigerian being led by the Nigeria Labour Congress.

The collaboration has resulted in NLC developing a Trade Union Information Guide for Returning Migrant and Migrant Workers; as well as a historic signing of MoUs between NLC and Trade unions in Bahrain and Qatar.

How fast things have changed in the last 5 years is a testimony to the collaborative work between ILO and NLC, and constant engagement with the Labour Centre’s affiliates and the media, where the capacity for affiliates of NLC, media and CSO have all been strengthened.

“To a large extent, the activeness of trade unions in migration governance has been on for the past five years. But to crown that, the fairWay, Migration Program, which is been administered in Nigeria, in collaboration with the ILO office, Abuja, and the Swiss Development Corporation has really and immensely deepen trade union involvement and activities in the area of labor migration,” comrade James Eustace of the NLC said.

To further deepen their efforts, ILO and NLC in September of 2021, signed an Implementation Agreement to strengthen the effectiveness of workers’ organizations for enhanced engagement in the overall national labour migration governance process in Nigeria.

James said, “The collaboration was consummated in 2021, when we had to sign an implementation agreement that spanned through a series of activities, capacity enhancements and issues around fair reporting of migration issues, and all of that. And that was to help promote trade union involvement and activeness, especially in the area of return and reintegration in the midst of COVID-19.

“Because one of the vulnerable sectors that was highly affected by the COVID-19 was the migrant sector. And we know the issues of forceful return, voluntary and involuntary returns where migrants became stranded. And we felt that as trade unions, these returning migrants are our members, our potential members, so it would be nice that we’re also active in the return and reintegration process.”

THE FUTURE NOW LOOKS EVEN BRIGHTER

Only recently, the NLC signed an MoU with GFBTU on advancing trade unions’ effective contribution to protect and promote rights of migrant workers along the Africa – Arab states migratory corridor.

The MoU is a first of its kind that was done within the context and through the framework of the FAIRWAY programme currently being implemented by ILO that the collaboration with NLC is being facilitated with a view to support workers activities around labour migration and further strengthen coordination between workers organizations.

Comrade James said: “Very recently now, we are in discussion with the ILO on how to develop a national trade union migration policy that will guide and regulate the activities of trade unions that will detail sectoral issues that trading unions need to carry out.

“And also, we are equally looking forward to the second stream of the collaboration under the fairWay program which will consolidate on the gains of the first stream.

“And one of the major gains of the first stream is the development of a trading union information guide on return and reintegration of returning migrant and migrant workers in Nigeria, which we need to also enhance our affiliates capacity on and also use it to interact with the media stream who will help to create or give visibility to the document and help to promote our work in the area of return or integration.”

ALIA: The wolf in sheep’s clothing