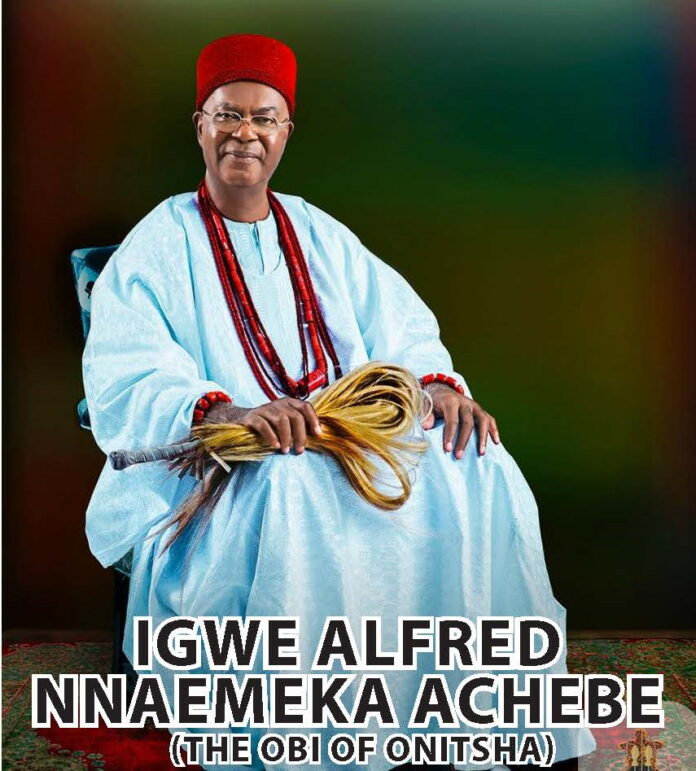 HIS Royal Majesty Igwe Alfred Nnaemeka Achebe is the 21st Obi of Onitsha, Anambra State, South-Eastern Nigeria. His Royal Majesty, Obi Nnaemeka Achebe, was born on May 14, 1941. He is the son of Akunne Anthony Chinwuba, and Chukwuebuka Winifred Ogbenyeanu Achebe, and a direct descendant of Ezearoli, from the lineage of Chimedie, Oreze Obi, and Aguzani.
After his primary and secondary education, Obi Alfred Achebe gained admission into Stanford University, California, United States of America in the year 1963.
At the university, he studied and obtained Bachelor’s degree in Chemistry. He proceeded for his Master’s degree in Business Administration, which he obtained from Columbia University New York in the United States.
In the year 1979, HRM Igwe Alfred Nnaemeka Achebe was nominated to the maiden set of the Senior Executive Course of the National Institute for Policy and Strategic Studies located in Kuru, Jos, Plateau State, a program that was targeted at developing high-level leadership in the public and private sectors in Nigeria.
HRM Igwe Alfred Nnaemeka Achebe worked for a while in the United States, however, during the Nigeria-Biafra war, he returned to Nigeria, precisely in the year 1972 to begin a long career
with Shell Petroleum Development Company of Nigeria. For a period of over 30 years, he held several strategic positions in several functions that includes Human Resources, Operations, External Relations, General Manager and international Representation/ Reputation Management. When he attained the retirement age of 55 years in 1996, Shell Petroleum Development Company of Nigeria requested HRM Igwe Alfred Nnaemeka Achebe to continue to provide his experience and expertise to the organization by a special arrangement. He was then transferred to Shell International, London, where he acted as “ambassador at large” for Shell Petroleum Development Company of Nigeria with the title of Senior Corporate Adviser, a position he held until his coronation May 14, 2002 as the Obi of Onitsha HRM: Igwe Alfred Nnaemeka Achebe was the Chairman of Diamond Bank Plc. His Royal Majesty: Igwe Alfred Nnaemeka Achebe was decorated An Ambassador of Messengers of Peace in Africa and member National Board of Trustees of The Scout Association of Nigeria on Saturday 18th or March 2017 at Agbogidi’s Palace Onitshaland.