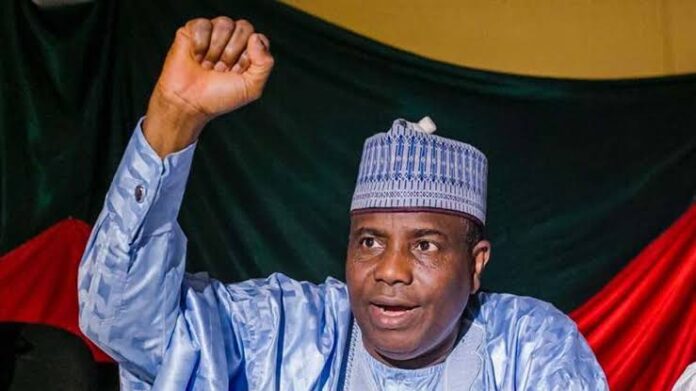 Governor Aminu Tambuwal of Sokoto State and a Presidential aspirant has rejected claims that Bukola Saraki and Bala Mohammed emerged as the Peoples Democratic Party, PDP, Northern consensus candidates of the party.

Tambuwal explained that reports of Saraki and Mohammed’s emergence were not the true reflection of their recent meeting held in Abuja.

He said the Abuja meeting was a review, and they agreed that the issue of a consensus arrangement was not working.

Speaking through the Tambuwal Campaign Organization, TCO, Director of Mobilization, Nicholas Msheliza, the Governor said they canvassed for a consensus candidate, not candidates, during the Abuja meeting.

He also explained how Saraki circulated messages on the emergence of Northern consensus candidates.

The statement reads: “The attention of Tambuwal Campaign Organisation (TCO) has been drawn to a news item that former Senate President, Bukola Saraki and Bala Muhammad of Bauchi state have emerged as consensus candidates from amongst the four of us announced at a meeting in Minna, Niger state.

“This is, to be candid and forthright, not correct. The correct situation is that the team met on Wednesday, 20th April, 2022, at Bauchi Governor’s lodge in Abuja and had a review meeting; and, unanimously agreed that the consensus arrangement was not working.

“The team further agreed that Saraki should come up with a draft statement on how to communicate this decision to the Nigerian public. This was the last time that members of the team sat and mutually agreed on anything. The proposed meeting to review and vet the statement scheduled for 10 pm of the same day was aborted unilaterally by Saraki via a WhatsApp message.

“However, on Thursday, April 21st, 2022, same Saraki circulated yet another WhatsApp message suggesting that members of the team should head to Minna for a meeting on Friday. Tambuwal reached other members of the team and informed them that he stands by the decision of the team that the initiative is not working.”

The Governor stressed that the outcome of the meeting with former Head of State, Ibrahim Babangida in Minna had no implication on his Presidential ambition.

“This is the reason Tambuwal was absent at Friday’s meeting in Minna. As a result, therefore, the outcome of the Minna meeting has no consequence or any implication on the aspiration of Tambuwal, who had earlier on informed his colleagues of maintaining their agreed position that the initiative has collapsed.

PDP Northern Elders had endorsed Saraki and Mohammed as the Northern consensus candidates of the party.

The decision was taken at a meeting held between the elders with General Ibrahim Badamosi Babangida at his Country home in Minna.

Addressing journalists shortly after, Professor Ango Abdullahi explained that about four aspirants from the North presented themselves for the consensus.

They include Tambuwal, Mohammed, Saraki, as well as Mohammed Hayatu-Deen.

From the North, former Vice President Atiku Abubakar has also declared his aspiration to emerge as the PDP’s flag bearer for the 2023 presidential election.