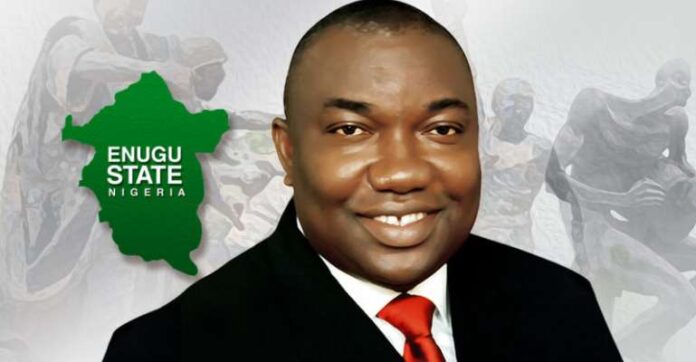 There was jubilation in Enugu North Senatorial District of Enugu State, as the Senator representing the district, Sen. Chukwuka Utazi, formally announced his decision not to contest the senatorial seat.

Utazi said he decided not to run to pave the way for the smooth and peaceful emergence of Governor Ifeanyi Ugwuanyi of Enugu State as the Senator of the Senatorial district in the 10th National Assembly.

The senator also declared that he would not participate in the forthcoming Peoples Democratic Party (PDP) primaries and the general elections.

Utazi made the announcement while addressing the delegates of the PDP from Enugu North Senatorial District and other stakeholders of the party in Enugu.

He said he did not purchase the Expression of Interest and Nomination forms of the party for the Senatorial seat to give Ugwuanyi, who he described as “our leader and brother”, maximum support.

The federal lawmaker added, amid jubilation, that the decision is also to promote the existing peace in Enugu North Senatorial District in particular and Enugu State in general.

Utazi reassured Gov. Ugwuanyi that the PDP family in Enugu North Senatorial District and the entire people of the district are solidly behind him and his political decisions in respect of the choice of candidates during the forthcoming party primaries.

He said, “We will follow our brother and leader; we are going to be behind you, and pray that God will guide you to take these decisions.

“We are here to reassure you that it is ordained by God that you do the things you are supposed to do.

“We are here to also reassure you that you have our backing. Our case is not just political. The followership and backing are also spiritual. And you have our spiritual backing too.

“The district is going to continue this support at the voting level during the general elections,” Utazi said.

The pronouncement by Sen. Utazi not to contest, prompted the State Deputy Chairman of the PDP, Mr Innocent Ezeoha to, on behalf of the people, thank Utazi for his sportsmanship and sacrifice in declaring his support for the governor’s senatorial bid.

“Senator Utazi, it will be well with you for making this sacrifice,” Ezeoha added.

According to him, the appreciation became necessary for his remarkable achievements in Enugu North Senatorial District in particular and the state in general in spite of the nation’s economic challenges and the state’s limited resources.

Onyeze noted that the appreciation was informed by the outcome of the assessment tour of infrastructural projects executed by the governor, including completed and ongoing landmark projects.

The PDP Zonal Chairman stated that the meeting was equally for the party delegates from Enugu North Senatorial District to renew their stand and reassure Gov. Ugwuanyi of their total support for his choice of party candidates for the State House of Assembly, National Assembly, governorship, and presidential seats.

He maintained that they are in support of the rotational zoning arrangement of the governorship position which favours Enugu East Senatorial District.

He stated that the governor has done a lot to maintain peace in Enugu State and strict adherence to the zoning pattern would enhance peace and security in the state.

“Your Excellency, you have done so well and we are proud of you. Our votes will not miss, even one vote. We will give you 100 per cent support in respect of your choice of successor and other elective positions,” he said.