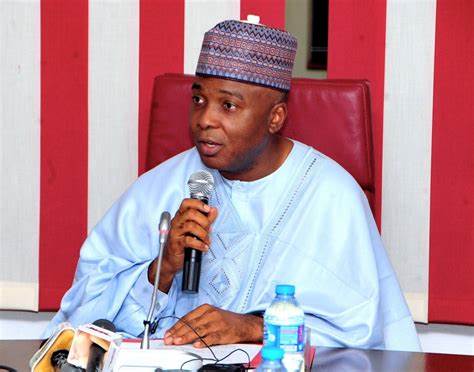 Ahead of the 2023 general elections in the country, a presidential aspirant under the Peoples Democratic Party (PDP), Dr. Bukola Saraki, on Wednesday described PDP as the only credible political party that would truly rescue Nigeria from the plethora of challenges confronting its development.

Saraki disclosed this in an interview with newsmen shortly after paying a private visit to Governor Ifeanyi Okowa at Government House, Asaba.

According to him, the PDP provides the only credible alternative that would move Nigeria forward.

Saraki added that the PDP government would secure the country where meaningful jobs would be created for the youths.

“As you can see, the country is going the wrong direction based on the statistics coming out every day.e

“Security in the country is not getting any better and the cost of living is getting worse everyday.

“PDP provides the only alternative for the country and ours is to ensure that we begin to secure the country such that our youths would begin to get jobs.

“You can see the debt level of loans that is affecting not only the federal government but states as well.

“We need the government and a party that has capable people who would be able to provide a new direction for this country.

“There is no doubt that what is best for Nigerians now, is to see that PDP forms the next government come 2023 and provide a better future for Nigerians,” he added.

Speaking on zoning in the PDP, the former Senate President said “well, as you know, that has gone to the zoning committee and they have done their report and forwarded it to the National Executive Committee (NEC) of the party.

“So, NEC is the highest body of our party and I can’t speak on that until we know what NEC will decide”, he concluded.