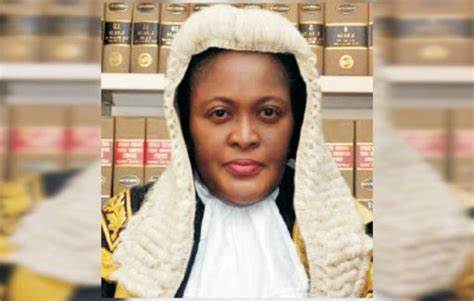 Following the outbreak of the civil war in 1967, Ukaego and her parents relocated to the southeast of the country. There, she continued her education at Owerri Girls High School until her family moved back to Mbaise. She then attended Mbaise Girls Secondary School and later enrolled at the Queen of the Rosary College in Onitsha.

In 1972, she passed with Grade I (aggregate 6) in the West African School Certificate Examination. The same year, Ukaego gained admission into the University of Nigeria, Enugu campus where she read law. In her second year in the university she earned a scholarship for maintaining the second class upper division league with higher scores. She met Peter Odili, a medical doctor, at a campus party and the two began a romantic relationship.

In 1976, she graduated with an LLB (Hons) and was rated the best student of the department of commercial and property law. Shortly after, she attended the Nigerian Law School and received her B.L. certificate in 1977, before embarking on her youth service in Benin City and Abeokuta. Odili was serving as a house officer in Benin City at the time.

Ukaego commenced her career in the judiciary as a Magistrate grade III in November 1978. Between 1980 and 1988, Ukaego served as Chief Magistrate Grade I, Chairman of the Juvenile Court, President, Marine Board of Inquiry into the 1979 Buguma Boat disaster, Chairman, Constitution Drafting Committee of the University of Nigeria Alumni Associates, Inaugural Chairperson of the International Federal of Women Lawyers (FIDA) Rivers State and Secretary, Nigerian Horticultural Society. With her support, Odili entered politics and served as member and leader of Rivers State Delegates to the Constituent Assembly.

In 1992, while she was a High Court Judge, Odili was serving as the Deputy Governor of Rivers State. In 1999, following her husband’s election as governor, Ukaego became the First Lady of Rivers State, serving until 29 May 2007.

Justice Odili retired from the apex court in May 2022.