HomeDear APC Delegates, Please Elect The Aspirant With The Least Baggage As...
Featured

Dear APC Delegates, Please Elect The Aspirant With The Least Baggage As Candidate For President 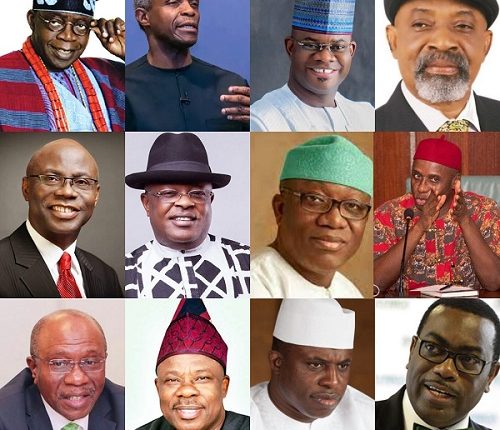 Every mortal has his or her own baggage, we aren’t Saints for saints aren’t mortal. We are therefore judged as good or bad based on the weight of our baggage. As the Primaries of the Political Parties approach, this effort is a plea to the delegates of our great Party the All Progressive Congress APC, to elect as our Presidential flagbearer the Aspirant with the least baggage.

The challenge to sift or if you like identify the Aspirant with the least baggage out of the 23 Aspirants who obtained the APC Presidential Nomination Form and are still in the race to become the Presidential candidate of the APC is an onerous one, but I shall attempt to do so as dispassionately as possible, because we must as a party put our best foot forward.

AHMED YERIMA. The former Governor of Katsina State comes in with a heavy baggage. The one of alleged religious fundamentalism. The one of child marriage. The one of disrespect for the rights of women and untamed patriarchy. And questions about his watch over Zamfara State.

ROTIMI AMAECHI. The immediate past Minister of Transportation, 8years Speaker of Rivers State House of Assembly, and two term Governor of Rivers State comes in with very heavy baggage. The one of over 15billion allegedly looted whilst he was Governor, to his lacklustre watch over the State. The one of several over invoiced contracts in the Ministry of Transportation to the poor safety regime for our Rail transport system. From the many double speak on issues of State to the fact that the Party in his home State is in disarray no thanks to his arrogance and naivety.

PROF YEMI OSINBAJO. The Vice President of the Federal Republic of Nigeria comes in with a fantastic CV but with a baggage that presents him as an unwilling horse, indeed his marketers may have unwittingly done great disservice to his candidacy. Nigerians are in need of a President who sees the job as his unalterable commitment to purpose and destiny, not one who had to oblige the plea to run.

ADAMS OSHIOMOLE. The former Governor of Edo State comes in with a huge baggage. His alleged egocentricity is at the core of the Party losing his home State. His legendary ‘I Am The Boss’ disposition saw to his awkward exit as the National Chairman of the Party. And the baggage of the many files with the EFCC speaks poorly about his position on anti corruption.

EMEKA NWAJIUBA the immediate past Minister of State for Education comes in with the baggage of a less than wholesome handling of the ASUU, ASUP, NASU issues, the poor mediation of matters relating to the Ivory Towers ditto our tertiary institutions and the Strikes involving almost all sectors of our public tertiary schools, and several scandals involving Federal Government Schools.

PASTOR TUNDE BAKARE. A fine clergyman who very recently stoked the ethnic fire with several unguarded remarks about one of the three major ethnicity in Nigeria. An Activist whose shots have shown huge bias for friendship and ethnicity. And an outsider in the larger political calculus cannot lead the Party to the challenge for the top job come 2023 as he comes in with the many baggage described above.

The challenge of birthing and berthing a new Nigeria is the cross before all Nigerians, whether of the APC, the PDP, the other Political Parties, and the nonpartisan, we must therefore dispassionately subject those seeking to steer the ship of State come 2023 to the stiffest and the most stringent intellectual crucible, we must make competency and capacity the linchpin and patriotism our watchword.

The Conversation Continues in a few days. God Bless Nigeria.