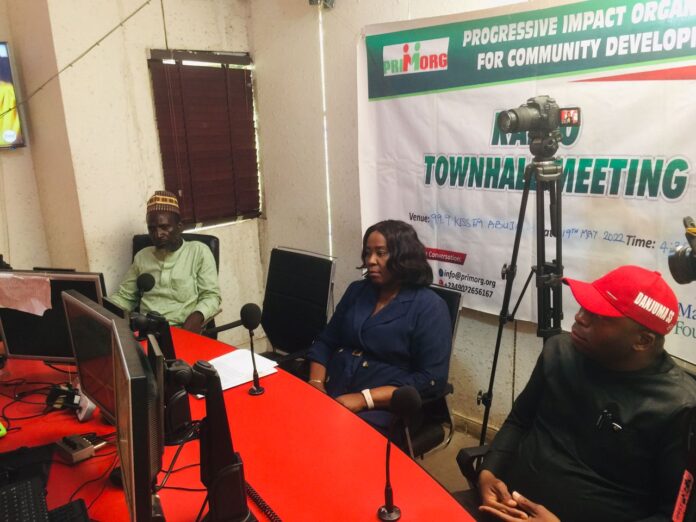 The Independent Corrupt Practices & Other Related Offences Commission (ICPC) says it will move to strengthen the synergy between legislators and Government Ministries, Departments, and Agencies (MDAs) saddled with the responsibility of implementing constituency projects in Nigeria.

According to ICPC, the push for synergy will go a long way in ensuring constituency projects are judiciously executed, as well as equip legislators with the necessary information to monitor the progress of projects sited in their constituencies from conceptualization to completion.

The Commission’s Spokesperson, Azuka Ogugua, disclosed this in Abuja during a Radio Town Hall Meeting (RTHM) organized on Thursday by the Progressive Impact Organization for Community Development (PRIMORG).

The Senator representing the FCT, Philip Aduda, had during the meeting disclosed that he had not been privy to the “Bill of Quantity” of constituency projects, making it impossible for him to know the exact structure and components of the projects under his nomination.

Reacting, Ogugua assured that ICPC would demand that MDAs share bills of quantities with legislators. Stressing that it was inappropriate for legislators who nominate projects not to have full knowledge of such an important document.

“We (ICPC) study the bill of quantities of projects to make sure that projects are implemented according to specification.

“I think it is a demand that can be made of the MDAs, and if they are not willing to release it, they (legislators) can come through ICPC because anybody that is monitoring is entitled to it, especially the senator that nominates the project because to nominate a project is one thing but the specifics that are put on paper, you might not have access to. I will take this back to the ICPC monitoring team.”

Ogugua called on Nigerians, especially rural dwellers, to see constituency projects as their own and get involved in the supervision and monitoring of projects sited in their localities, and also report to their lawmakers when contractors fail to deliver.

Similarly, Aduda urged his constituents to protect and sustain constituency projects in their communities.

On the cases of abandoned constituency projects, Senator Aduda said that his close monitoring of projects and personal intervention in some instances was paying off, ensuring most FCT projects were completed.

The senator was represented by his Special Adviser on Special Duties, Danjuma Samuel Shekwolo.

He joined calls for synergy between government agencies implementing constituency projects and members of the National Assembly who nominated the projects, stressing that the synergy will help monitor projects better.

On reasons why abandoned constituency projects are still surfacing, Shekwolo said,” I feel why we see the abandonment of projects or incompletion, sometimes due to lack of funds.

“Sometimes, when the election is around the corner, some of these legislators will not come back to the National Assembly. What then happens to projects that have started this year and are not completed? Another legislator comes in. He doesn’t buy the idea of the other legislator, so it is the responsibility of the host community to look for the implementing agency, we have this project that the outgone legislator started, and unfortunately, he didn’t complete it. Please come and finish it for us, not to say it is government property. Let us leave it. After all, it is government property. It is their money. It is their taxes that they pay. It is not the legislator’s money. It is not the National Assembly’s money.”

The PRIMORG’s Radio Town Hall Meeting on Constituency Projects seeks to encourage citizens to take ownership of Zonal Intervention Projects (ZIP) and promote accountability and sustainability in their execution and usage.