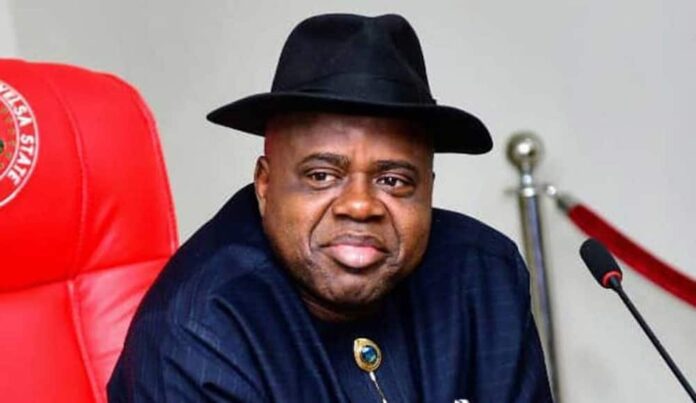 Bayelsa State Governor, Senator Douye Diri has reabsorbed cabinet members and other appointees, who earlier resigned and later stepped down for a consensus aspirant during the recently conducted primaries of the People’s Democratic Party (PDP) in the state.

Governor Diri made the declaration on Wednesday at the 76th State Executive Council meeting in Government House, Yenagoa.

Governor Diri, who commended the peaceful conduct of the aspirants during the exercise, noted that it was great to cheer that most of them put the interest of the party above their personal ambitions by stepping down when they needed to do so.

He stated that loyal party members who made sacrifices would always be recognised and rewarded accordingly by the PDP.

While congratulating the winners of the primaries, Diri enjoined them to reach out to the losers for reconciliation and work together for the success of the party in the forthcoming elections, stressing that the exercise was a family affair and that the PDP was the ultimate winner.

He advised those who could not make it this time to see the results as an act of God, adding that the electoral act resulted in a lot of upsets in the political space.

His words: “Let me use the opportunity to appreciate most of the aspirants whom we spoke to, some of them even on the day of the primaries, while some on the eve of the primaries and for very obvious reasons and respect for the party and the government, stepped down for others.”

“For all those who had political appointments who stepped down and did not participate and contest in the primaries, their appointments are hereby restored.

“Therefore, the Acting Chief of Staff is directed to ensure that all of those people are restored into their appointive positions.

“That is what we keep saying, sacrifices have to be done, and once you do sacrifice, the system will also recognise you.

“Going forward, I’m very glad and I’m sure that we are prepared for 2023. We are putting our house in order and we will continue to put it in order where there are dissent and disagreements.

“I congratulate those who are flag bearers, who are candidates for our party and also those who lost as good sportsmen and very gallant in what they believe in and be sure that we win and continue to click as one party. Let the party take precedent over our personal ambitions and the party will always recognize those who have contributed and sacrificed for the party.

“I keep saying that this is an internal family affair, from these primaries, there is no winner or vanquished, we are all winners; our party is the winner”, he added.