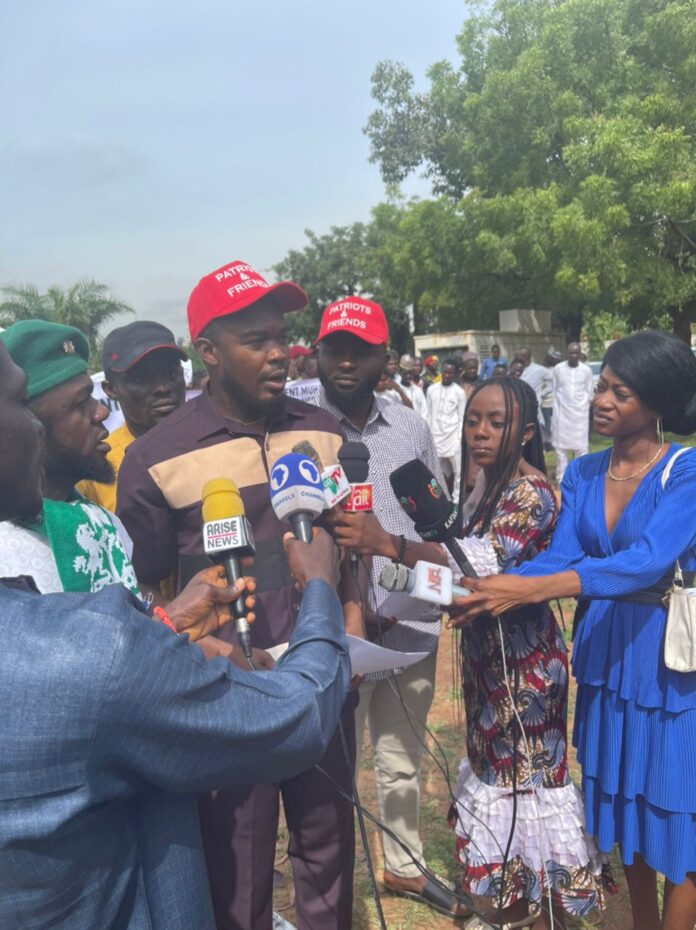 The Coordinator, Stand Up Nigeria, Sunday Attah, on Saturday berates the action of some oil marketers who are hiding under various claims to create artificial logjams in order to force the government to increase the pump price of fuel.

Attah describe the development as most unfair as even under the current arrangement where the official pump price is N165 the marketers still make huge profits.

The Coordinator, in his One Day Rally Text on the Lingering Fuel Crisis in FCT and Some other States in Nigeria said, the rally became pertinent in view of the toll the fuel crisis is taking on the economy of Nigeria and the attendant socio-economic effect on citizens.

“Quite unfortunately, queues have resurfaced in many states including the Federal Capital Territory, Abuja, that many are finding it difficult to go about their normal schedule without incurring further costs.

Consequently, Nigerians have expressed outrage at the build up of these queues and the resultant hardship.

While the outrage is justifiable given Nigeria status as the 6th largest oil nation in the world and the hardship occasioned by the need to access Premium Motor Spirit, the angst is misplaced as the Nigeria National Petroleum Corporation, (NNPC) which some are blaming for the current situation is totally blameless as it is equally worried and doing all it could to bring the situation to normal.

The NNPC under the able leadership of Mele Kyari has no hand in the resultant hardship being suffered by Nigerian in the bid to access the petroleum product as the corporation has been up and doing to ensure that Nigerians have enough fuel to power their vehicles and other devices for the well being of the citizenry” the statement”.

The group however, exonerated the NNPC from playing any role in the ongoing scarcity after carrying out investigation into the cause of the problem.

“Our investigation have revealed NNPC has not relented in its task of importing products so as to ease transportation and other challenges that have to do with the use of fuel.

We can authoritatively say that all the jetties are fully stocked as a result of these efforts and currently have no less than 1. 9 billion liters of fuel which ordinarily should serve Nigerians for 32 days non stop even if a single liter is not been imported within the intervening period.

Our findings have also revealed that there is no problem with transportation of products as government has not only paid but has increased the incentives for transporters.

The problem, we have since established is not with the NNPC but with the marketers who are hiding under various claims to create artificial logjams in order to force the government to increase the pump price of fuel.

This is most unfair as even under the current arrangement where the official pump price is N165 the marketers still make huge profits”.

Further more, that in order to maximize the profit for transporters, the government has even increased the freight cost with N10 per liter which brings to about N24 per liter the amount it pays to transporters on every liter

This is a huge amount that when multiplied results in huge profits for the marketers and ordinarily should have encouraged them to work harder in line with government’s bid to satisfy the citizenry.

This is more so as the government did that without transferring the responsibility to consumers so as not add to the hardship on Nigerians.

We therefore frown at the artificial scarcity being created by marketers all in the bid to maximize profit at the expense of millions of Nigerians who are being forced to pay double for fares in order to move from one place to the other and the man hours being wasted just to buy fuel.

Vital component of the economy like banks, courts, factories etc are forced to reduce their working hours due to lack of fuel.

We therefore call on the marketers to show more sense of patriotism by taking into cognisance the pains they put other Nigerians through just to make profit.

We commend the NNPC GMD for standing firm for Nigeria in this trying period and for shunning all forms of intimidation to take actions that are against the interest of the masses.

Looking at other countries and the global price of PMS across the world today, we can confidently say that Mallam Mele Kyari is a miracle worker to see that Nigeria and Nigerians are still buying PMS for 165 per liter.

The landing cost of PMS to our country today is 600 per liter and government has not added one naria to what the marketers were buying before so should the marketers think of selling above government price all in the name of transportation cost?

This is why we are calling on all oil marketers and other stakeholders in the industry to be patriotic and shun sharp practices and put the interest of Nigeria and Nigerians above their high profit-making Target”, Sunday added.