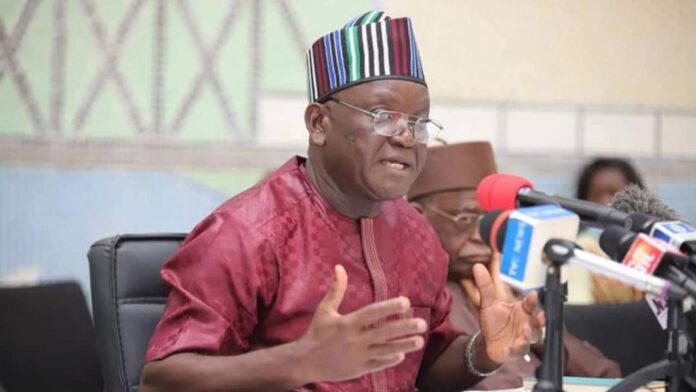 The Forum of Middle Belts Youths President has described Governor Samuel Ortom of Benue State as a symbol of nationalism and patriotism following his call on the Federal Government to effect the immediate release of the leader of the Indigenous People of Biafra,IPOB,Nnamdi Kanu from detention.

Nmamdi Kanu has been in detention for some time now

President of the Forum, Terrence Kuanum in a statement issued in Makurdi described Ortom as a dogged, fearless political strategist and nation builder.

Governor Ortom had  said the  unconditional release of the IPOB leader would make the peace process in the country to be taken seriously.

Kuanum said Governor Ortom’s admonition couldn’t have come at a better time, especially as the continued detention of Nnamdi Kanu has not solved any problem and other people have resorted to keeping silent for political correctness.

“While the conspiracy of silence is loud among those who are directly or indirectly involved in the seeming persecution of Kanu and the spiral of silence continues around those cowed by the antagonists of the struggle for equity, justice and fairness, Governor Ortom who has all along been a lonely, but loud voice in the wilderness has once again stood firm for justice.

“That the Benue State number one citizen is bold to shout for justice for Kanu and others goes to confirm further that he is truly the people’s advocate. He has never shied away from calling a spade what it is, no matter whose ox is gored.

“The governor’s penchant for leading any cause towards the entrenchment of social justice has indeed endeared him to all Nigerians so that people from other states wish he was their Governor even as he has persistently stood for all irrespective of religion, region, tribe, social status, economic strength, educational attainment etc.

“It is truly unconscionable for a government which has treated boko haram and other terrorists wrecking havoc in some regions with kid gloves to turn around and clamp down on people whose major crime are demand for inclusion, justice, fairness and equity.

“What on earth would the federal government say is the rationale behind pampering terrorists with rehabilitation, feeding, settlement and reintegration into the society despite the damage they did to the lives and property of both civilians and our security agents, while deploying huge arsenals to confront people demanding for self-determination?

“Suffice to say these senseless use of power and influence coupled with indiscretion in managing crisis fairly have been curtailed by Governor Ortom’s unrelenting and outspoken disposition towards evil in high places.

“He is a man that never sees black and calls it something else. That has earned him the reputation of a rallying point for the downtrodden and a bridge to the next generation.

“The governor often comes under attack by elements of darkness who are obviously disturbed by his insistence that the right thing should be done.

“But in all, he is a hero both now and in the future. He shall always be remembered for standing for the truth, speaking the truth and ensuring that the oppressed are allowed to breath fresh air.

“We support his latest call for the release of Kanu and advise the government to heed the advise. Like the governor said, the best way of handling the issue is through a political means and not otherwise.

“The continued and unnecessary detention of Kanu has rather heightened the agitations he led before he was kidnapped in a foreign land and thrown behind bars like a dangerous criminal.

“We also implore Governor Ortom to keep telling truth to power. We are solidly behind him and willing to stand by him at all times as he champions the crusade for the emancipation of those who don’t have a voice of their own” he said